Deepika Padukone posed while in the get-up of her character Malti. 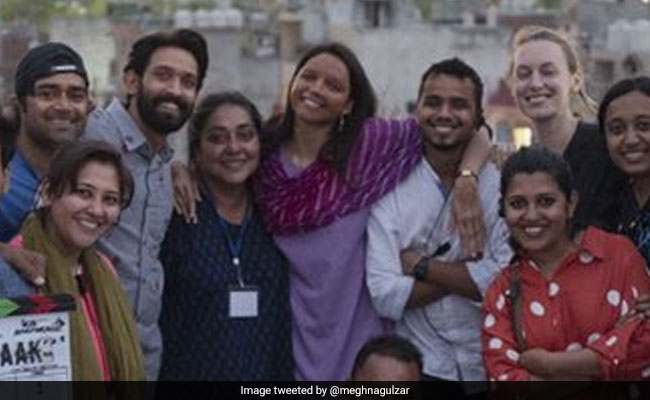 Deepika Padukone with team Chhapaak on the sets of the film in New Delhi. (Image courtesy: Twitter)

Chhapaak, starring Deepika Padukone and Vikrant Massey, is 'halfway done' as the team wrapped its Delhi schedule on Monday, tweeted director Meghna Gulzar. "Happily halfway done! Delhi schedule wrap for team Chhapaak," she wrote. On social media, team Chhapaak signed off with two group pictures, one of which was taken near the Rashtrapati Bhavan at the Raisina Hills in the Capital. In the other picture taken at a rooftop of an undisclosed locality, Deepika poses with Vikrant, Meghna Gulzar and the others from the team. She posed while in the get-up of her character Malti. Deepika plays an acid attack survivor in the film, which is inspired by the life and work of Laxmi Agarwal, also an acid attack survivor.

Chhapaak went on floors on Holi (March 21) in New Delhi. Earlier, speaking to news agency IANS, Deepika had said: "It's a very important film and I feel that the story which we are showcasing in our film needs to be told." A few days after the film went on floors, the filmmakers revealed Deepika's first look from the movie, which went insanely viral and it was highly appreciated on social media.

Laxmi Agarwal, who protested against the unchecked sale of acid after the near-fatal attack on herself, told IANS that the fact that a star like Deepika not just chose to act in, but also produce such a story, was overwhelming. "I felt, 'See, they are finding beauty in an acid-burnt face'," Laxmi said of the roaring response that the actress' look for the film, got all over social media.

Chhapaak is slated for 2020 release.