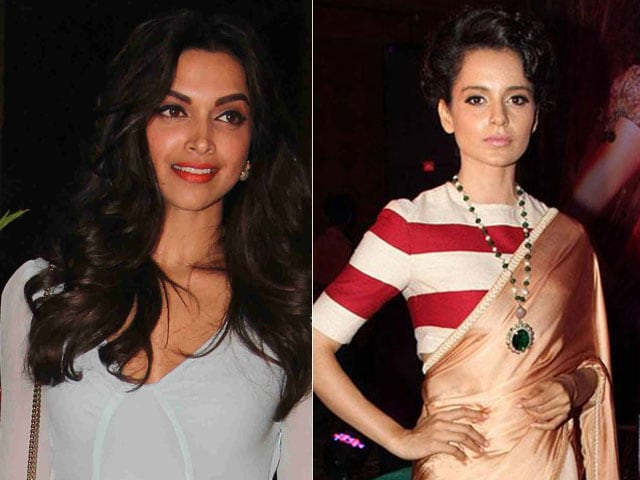 Kangana revealed that Deepika had called her

New Delhi: Actress Deepika Padukone and Kangana Ranaut have apparently only just recently forged a personal connection, despite a handful of public encounters - including the NDTV Indian of the Year show in 2014 where both were awarded - and acknowledgments, like when Deepika dedicated a Best Actress win to Kangana in honour of her Queen performance.

The Hindustan Times reports that Deepika recently made a phone call to Kangana in Manali, where her parents live. The Tanu Weds Manu actress is quoted as having said, "Deepika called me, and clarified that she had no personal equation with me to make a direct call (to appreciate her performance in Queen). Also, I explained to her how it would have been unjust for me to publicly acknowledge an award from her when I have decided not to attend any awards functions. It was an emotional and heartfelt conversation. I appreciate that she called me; she is truly courteous and very emotional, and I just love that."

Deepika is believed to be one of few actors who didn't congratulate Kangana in person after her acclaimed performance in 2014's Queen, for which she has been named Best Actress at the National Awards.

Promoted
Listen to the latest songs, only on JioSaavn.com
For her part, Deepika has never been shy of publicly reaching out to those colleagues she considers her friends. She has Twitter conversations with Bajirao Mastani co-star Priyanka Chopra and was photographed hugging actress Anushka Sharma in Mumbai at the March meeting between Bollywood delegates and Rajyavardhan Rathore, Minister of State for Information and Broadcasting.

Both Deepika and Kangana have big films coming up. Piku, in which Deepika stars with Amitabh Bachchan, is out on May 8. Kangana's Tanu Weds Manu Returns, starring the actress in a double role, releases on May 22.