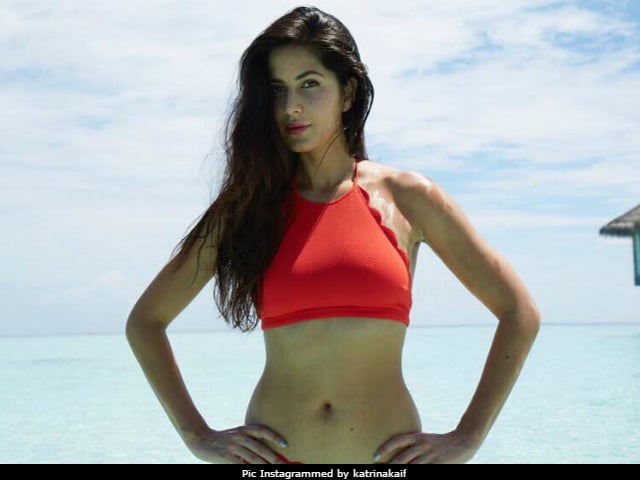 New Delhi: Jagga Jasoos done. Now, Katrina Kaif spends more time amusing her Instagram followers with new posts, cool prank videos, entries from her travel diaries and glimpses of her shoot locations and of course, throwback pieces. On Thursday, Katrina's loyal Instagram followers were reminded of one of her old posts as she shared a throwback picture (from not so long ago). This is not the first time she's dug up old pictures from the archives and delighted fans and followers. Remember when she posted one of herself as a young girl and her mother? Another throwback piece featuring herself as a 12-year-old had also told us she aspired to be a model in her teens.

However, the recent one she's posted is a bit different and is reminiscent of another one, like we said. Katrina made her Instagram debut on April 27 and within a week of which she shared a beach-side picture of herself in red swimwear. The location appeared every bit exotic and is perhaps from one of her photoshoots. Katrina's throwback post is a zoomed out mid-shot from the same location and perhaps the same day. Previously, she had written: "sunny days, sunny places #ilovesummer" on Instagram and the new post reads: "throwback."

This is what we were talking about:

Here's are the one with her mother:

My most favourite memory of my childhood was always dancing with my mother . To the strongest woman I know ..... what would the world be without you ... #happymothersday

This is Katrina as a 'wannabe' model:

Last month, an old vintage-like pic of Katrina with late Libyan dictator Muammar Gaddafi along with actresses Neha Dhupia and Aditi Gowitrikar went crazy viral. It was originally Instagrammed by former model Shamita Singha, who also features in the picture, but was later deleted after she was trolled for describing the meeting with Gaddafi as a 'privilege' in the caption.

. :) Flash back:Check out this picture, clicked 15 years back, in Libya. #KatrinaKaif was attending a fashion show there, and she is seen here posing with #NehaDhupia, #AditiGovitrikar and Libyan revolutionary politician #MuammarGaddafi.

BTW, Katrina is currently filming Tiger Zinda Hai, her new film with Salman Khan, in which the rumoured exes reprise their roles from 2012 movie Ek Tha Tiger. She recently Instagrammed a picture from the sets of Tiger Zinda Hai in Morocco, where the film's team is is currently at work. Director by Ali Abbas Zafar, Tiger Zinda Hai is expected to arrive in theatres later this year.

Promoted
Listen to the latest songs, only on JioSaavn.com
Meanwhile, a tour of Katrina Kaif's Instagram reveals a lot of secrets about the actress (a true blue Katrina fan would know). For example, Katrina likes to grow carrots and that pancakes are a must for her to have a great Sunday. Also that she has a favourite blanket (like many of us) and that Yash Raj boss Aditya Chopra is not a myth.

You can grow your own carrots .

Katrina Kaif's new film Jagga Jasoos, co-starring Ranbir Kapoor, released earlier this month and failed to live up to the hype. She also has Thugs Of Hindostan in the pipeline and will also be seen in Anand L Rai's next project, in which Shah Rukh Khan plays a dwarf.