The picture of Katrina Kaif, featuring Gaddafi with a group of Indian models that also includes Neha Dhupia and Aditi Gowitrikar, has gone crazy viral 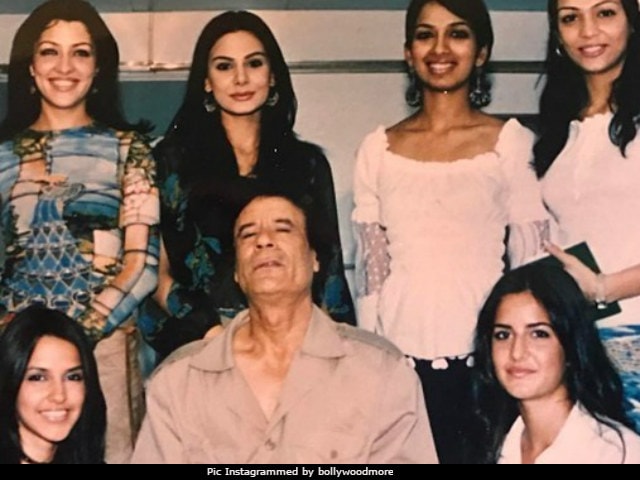 New Delhi: Actress Katrina Kaif is trending. No, no, not for Jagga Jasoos this time but for a rather incredible throwback picture with late Libyan dictator Muammar Gaddafi. The picture, featuring Gaddafi with a group of Indian models that also includes Neha Dhupia and Aditi Gowitrikar, has gone crazy viral. The photo was shared on Instagram by former model Shamita Singha - standing behind Katrina - who deleted the post after being criticized for describing the meeting with Gaddafi as a 'privilege' in her caption. The picture dates from almost 15 years ago, when Katrina and her companions were in Libya for a fashion show. Fan clubs have circulated the picture despite it being removed from Shamita's Instagram.

Katrina was likely just 18 then and still a year or so away from making her debut as an actress in filmmaker Kaizad Gustad's 2003 film Boom. Here's the picture of Katrina Kaif and Gaddafi:

:) Flash back:Check out this picture, clicked 15 years back, in Libya. #KatrinaKaif was attending a fashion show there, and she is seen here posing with #NehaDhupia, #AditiGovitrikar and Libyan revolutionary politician #MuammarGaddafi.

Some years ago, Beyonce, Mariah Carey and other pop stars were criticised when it emerged they had been paid to perform at private parties hosted by Gaddafi's son. Katrina, however, is unlikely to be embarrassed by an old group picture featuring a dictator who presided over a notoriously brutal regime. Gaddafi died in 2011.

Promoted
Listen to the latest songs, only on JioSaavn.com
Boom, which also starred Amitabh Bachchan, Padma Lakshmi and Madhu Sapre, was a dud but launched Katrina Kaif into the Bollywood consciousness. Katrina had already modelled at London Fashion Week, where she was spotted by Kaizad Gustad. Soon after Boom happened, she was spotted at India Fashion Week, walking the ramp for Rohit Bal. She also featured in the Kingfisher calendar the same year. Katrina was 14 when she signed her first modelling contract with a jewellery brand.