Dear Karan Johar, Thank You For This Pic Of Yash And Taimur 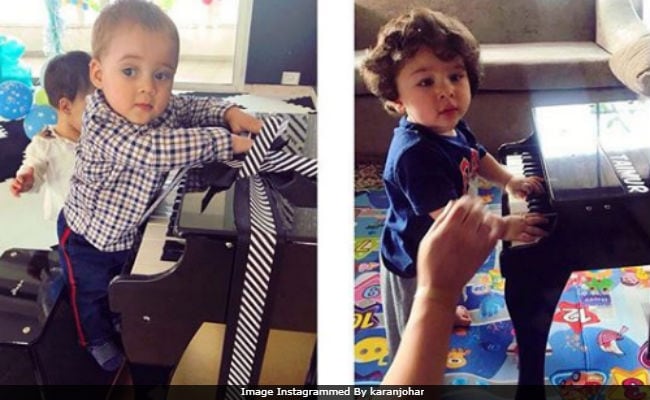 New Delhi: Monday blues? Here's an absolutely adorable picture of Yash and Taimur to start your day, courtesy Karan Johar. The filmmaker shared a picture collage of the kids on Sunday night, which appears to be from his children Yash and Roohi's first birthday party, celebrated on February 7. "Future musicians," Karan Johar captioned the post, which features Yash and Taimur playing piano. Yash and Roohi's birthday party was attended by Kareena Kapoor and son Taimur, Rani Mukerji most probably accompanied daughter Adira, Arpita Khan Sharma and son Ahil and other celebs like Alia Bhatt, Sidharth Malhotra, Shweta Nanda Bachchan, Manish Malhotra and Kajal Anand. Karan Johar became a father to twins Yash and Roohi via surrogacy last year. Yash has been named after his late grandfather Yash Johar while Roohi's name is a rearrangement of her grandmother Hiroo's name.

Take a look at the picture Karan Johar shared.

After the party, Karan had shared a picture of Alia, Rani and Kareena and captioned it as, "Girls squad goals."

Promoted
Listen to the latest songs, only on JioSaavn.com
Of the twins' birthday celebrations, Karan Johar had earlier told DNA, "It's a small birthday party at home. I want to keep it simple and intimate this year." He had reportedly invited Shahid Kapoor's wife Mira Rajput and their daughter Misha also.

Taimur, son of Kareena and Saif Ali Khan, turned one last December. His birthday party was held at the Pataudi palace, which was attended by Karisma Kapoor and her kids, Kareena's parents Babita and Randhir Kapoor, uncle Karan Kapoor and Amrita Arora and family.