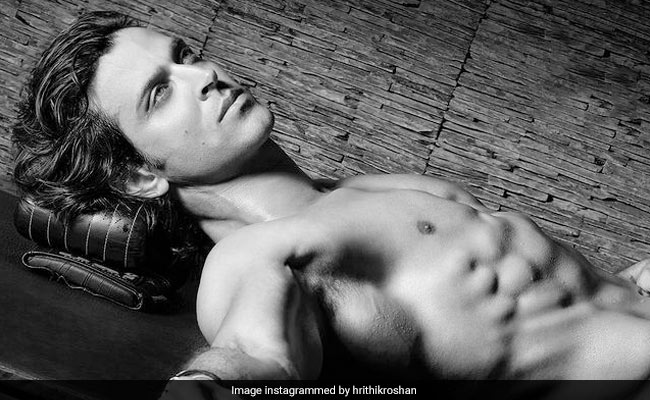 Wow would be an understatement for Hrithik Roshan's latest Instagram entry. On Friday, the actor shared a perfect shot of himself, which happens to be from ace photographer Dabboo Ratnani's 2021 calendar. In the greyscale picture, Hrithik Roshan can be seen intensely staring as he lies sans a shirt. We also got a glimpse of the actor's abs in the photograph. He simply captioned the post: #dabbooratnanicalendar2021. Hrithik Roshan's post is setting the Internet ablaze. The rain of fire emojis in the comments section of his post is proof.

The actor, a few days ago, shared a shot of himself, on which his ex-wife Sussanne Khan wrote: "You look 21." They frequently trend for their Instagram exchanges. Sussanne Khan and Hrithik Roshan got married in the year 2000 and they got divorced in 2014. They are parents to sons Hrehaan and Hridhaan. Last year, Sussanne moved in with Hrithik so that the kids could be with both parents during the lockdown. They frequently shared posts from their fam-jam sessions together.

In terms of work, Hrithik Roshan, on his birthday in January this year, announced his new project - a film, co-starring Deepika Padukone, which is titled Fighter. More details about the film are awaited. He was last seen in the blockbuster hit War, co-starring Tiger Shroff and Vaani Kapoor. The same year, he also starred in the film Super 30, which released in 2019.