Dabangg 3: Sonakshi Sinha asked her fans to wish her luck on the first day of the film's shooting 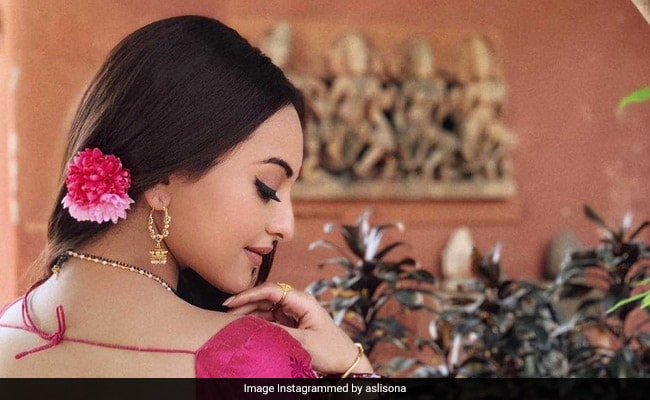 Sonakshi Sinha on the sets of Dabangg 3. (Image courtesy: aslisona)

Sonakshi Sinha teased her Instafam by sharing a glimpse of her look from her forthcoming film Dabangg 3. Sonakshi, who has reprised her role in the film, shared a picture of herself from the first day of the shoot. In the photograph, the 31-year-old actress can be seen dressed in a printed saree. She accessorised her look with a matching flower and looks extremely graceful in the picture. Sonakshi, who plays Salman Khan's wife Rajjo in the film, wrote: "Rajjo is back! From Dabangg, to Dabangg 3... Its homecoming. Day 1 of shoot for me today, wish me luck." She added the hashtag "#DabanggGirl" to the post.

Sonakshi Sinha received over 1 lakh likes on her Instagram post and a shout out from her colleagues. Her Kalank co-star Varun Dhawan wrote: "Slow claps." Sophie Choudry reviewed the look as "pretty" and wished her luck. Take a look at Sonakshi Sinha's post here:

Film's lead actor Salman Khan, who is currently in Madhya Pradesh for the shooting of Dabangg 3, shared pictures from the sets of the film on his Instagram profile earlier this week. ICYMI, here are the posts shared by Salman Khan:

Dabangg 3 is the third installment of the super hit Dabangg series. The film will be directed by Prabhu Deva. Dabangg 3 will be Salman and Prabhu Deva's second collaborative project. The duo worked together in the 2009 hit film Wanted. Just like its previous renditions, Dabangg 3 will also be produced by Salman's brother Arbaaz Khan, who played the role of Makhanchan Pandey in the Dabangg series.

Dabangg 3 will reportedly release in December this year.