Count The Kapoors In This Vintage Pic: Karisma, Kareena And Riddhima With Grandad Raj 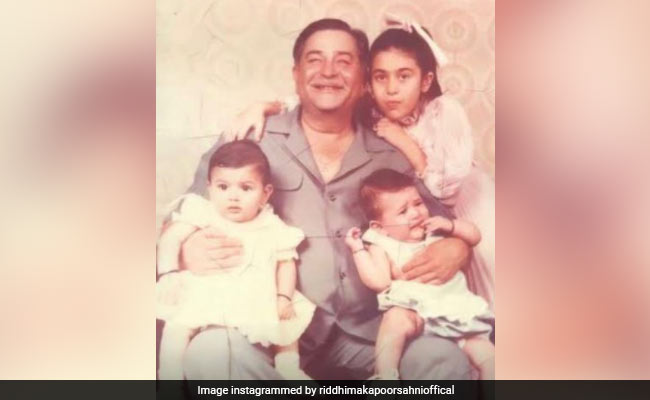 Raj Kapoor, who is remembered as the greatest showman of Indian cinema, died at the age of 63 in 1988. Raj Kapoor's granddaughter Riddhima Kapoor Sahni paid a tribute to the legendary actor on his 33rd death anniversary on social media. On Wednesday, Riddhima posted a throwback picture of herself from her childhood days in her Instagram story. The picture also features Riddhima's grandfather Raj Kapoor and her cousin sisters Kareena Kapoor and Karisma Kapoor. In the picture, Raj Kapoor can be seen happily posing with all of them. While the little munchkins Riddhima and Kareena are resting on their grandfather Raj Kapoor's lap, Karisma has kept her hands on his shoulders. Raj Kapoor is smiling in the frame. Adorable, isn't it?

Riddhima kept her caption simple and added a folded hands emoji in the Instagram story. See the screenshot of her post here.

Meanwhile, Neetu Kapoor also remembered her father-in-law Raj Kapoor on Instagram. Neetu Kapoor posted a short clip of Raj Kapoor on the platform in which he can be seen giving an interview. The interview was presumably recorded in the 80s. In the video, the veteran actor is talking about life and death. He also speaks about the regrets of his life in the clip. The song Jaane Kahan Gaye Wo Din from his iconic 1970 film Mera Naam Joker can be heard in the background.

"Being old and then death, I suppose it's normal. There are so many regrets I can't tell you. I am full of them. Because what I wanted to be...don't think I have yet anyway reached near it. My regret is that lord when I just started to play, don't take me away. When time...life teaches you...age teaches you and now you feel like somewhere near accepting what the one above has granted you...given you...in abundance all around you...nature to do...to achieve...you feel it is getting late...there is a very little time left. That's one thing to regret...(sic)," Raj Kapoor says in the video.

Raj Kapoor was an actor, director and producer. He is remembered for his wide contribution to the Hindi cinema. Raj Kapoor acted in several iconic films such as Awaara, Shree 420, Mera Naam Joker, Anari, Chori Chori and Sangam to name a few. Apart from directing Awaara, Shree 420, Mera Naam Joker and Sangam, he also helmed movies like Bobby, Satyam Shivam Sundaram and Ram Teri Ganga Maili.