"Throwback to when we went for a KKR match," Maheep Kapoor captioned her post 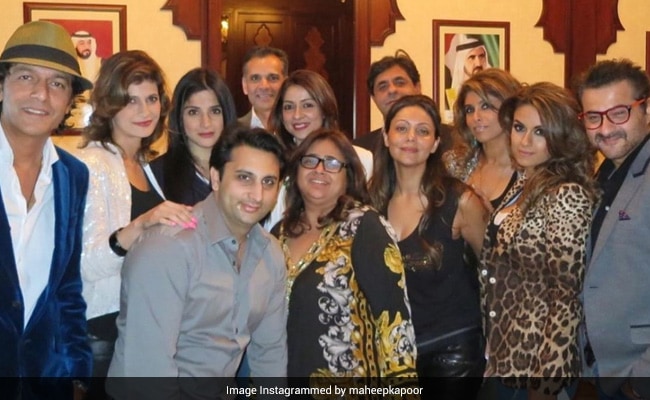 Maheep Kapoor has an impressive collection of throwback photos on Instagram and she keeps adding to the list. On Tuesday, when Kolkata Knight Riders had a match with Mumbai Indians, Maheep shared a few throwback memories from when she flew to Abu Dhabi for an IPL match. Maheep described herself as a "KKR cheerleader" forever - she's part of Gauri Khan's friends' circle. Gauri Khan is the wife of Shah Rukh Khan, who co-owns the IPL team Kolkata Knight Riders. In Maheep's photos, she can be seen posing with her husband Sanjay Kapoor, Gauri Khan, Bhavana Panday and her husband Chunky, Serum Institute CEO Adar Poonawalla and his wife, socialite Natasha.

"Throwback to when we went for a KKR match," Maheep Kapoor captioned her post. Count the celebs in Maheep's throwback photos.

In Tuesday's IPL match, Mumbai Indians beat KKR by 10 runs, after which Shah Rukh Khan tweeted: "Disappointing performance to say the least, Kolkata Knight Riders. Apologies to all the fans!"

Disappointing performance. to say the least @KKRiders apologies to all the fans!

Maheep Kapoor's daughter Shanaya is part of a BFF trio, comprising Shah Rukh and Gauri's daughter Suhana Khan, and Chunky and Bhavana Panday's daughter Ananya. Meanwhile, Shanaya is all set to make her Bollywood debut with a Dharma Production movie, which she announced recently. Maheep Kapoor was once a model and an aspiring actress. She was supposed to make her Bollywood debut the year she got married but her film got shelved. Maheep Kapoor has featured in the Netflix series titled Fabulous Lives Of Bollywood Wives along with her close friends Bhavana Panday, Seema Khan and Neelam Kothari.