Chiranjeevi, Salman Khan And Vijay Deverakonda In A Blockbuster Pic

Talk about a star-studded picture 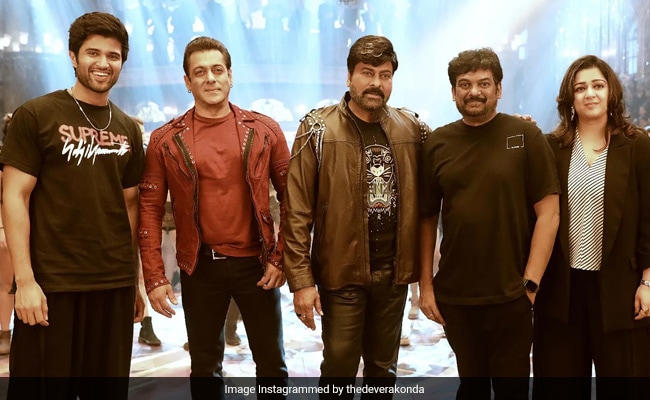 Liger star Vijay Deverakonda, who is super busy with the promotional duties of the film, shared one picture-perfect frame on Instagram, on Monday. In the picture, he can be seen posing with Chiranjeevi, Salman Khan, Liger director Puri Jagannadh and the film's producer Charmme Kaur. Sharing the blockbuster picture, Vijay Deverakonda captioned his post: "Megastar Chiranjeevi Sir and Salman Khan sir - Your blessings and love for Liger means the world to us. My respect and love always." The film also stars Ramya Krishnan, Mike Tyson and Ananya Pandayin pivotal roles.

Liger showcases the story of a tea-seller (played by Vijay Deverakonda), who dreams of making it big as an MMA Champion. He competes in an MMA championship in Las Vegas and roars in the ring.

Here's the trailer of Liger:

The film has been directed by Puri Jagannadh and it has been co-produced by Karan Johar, Charmme Kaur, Apoorva Mehta and Hiroo Yash Johar under Puri Connects and Dharma Productions. The film will be releasing in theatres worldwide on August 25, 2022.

Meanwhile, Chiranjeevi and Salman Khan will co-star in GodFather, which is the remake of Prithviraj Sukumaran's Malayalam film Lucifer, which featured Mohanlal in the lead role. GodFather, directed by Mohan Raja, also features Nayanthara and Satyadev. The film is produced by Konidela Production Company along with Super Good Films.