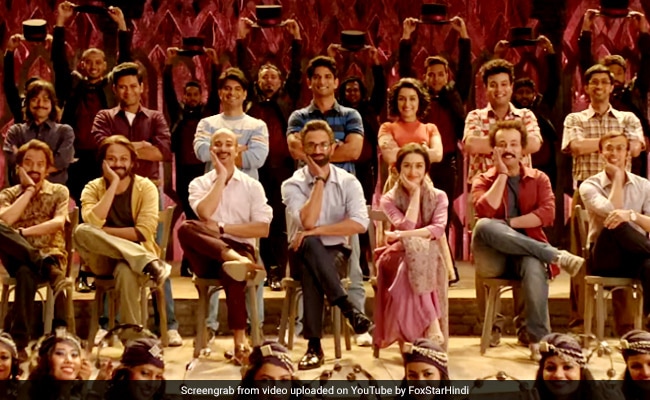 Chhichhore Trailer: Sushant and Shraddha with the cast (courtesy YouTube)

Chhichhore trailer is the perfect way to start your Friendship Day 2019. The Chhichhore co-stars Sushant Singh Rajput and Shraddha Kapoor introduced the trailer in their own ways - "Happy Chhichhore Day to all my Twitter Chhichhore! Here is our trailer," wrote Shraddha while Sushant added: "Chhichhore are here to show you a glimpse of true friendship." The trailer begins on a very 3 Idiots note with glimpses of Sushant's (Anni) first day in college. The first friend he makes is Varun Sharma (Sexa), who turns out to be his mentor and guide to navigate difficult college days. Sexa introduces Anni to the "I love you wala friend" Shraddha Kapoor AKA Maya, whose first impression of Anni is that he's gay.

Anni and Sexa's 'chhichhore' gang is soon joined by more partners-in-crime and enter Tahir Raj Bhasin as Derek, Naveen Polishetty as Acid, Tushar Pandey as Mummy and Saharsh Kumar Shukla as Bevda. Together, they are proud to be the "losers" of college until one day, when they decide to alter their reputation by winning the college championship. But the chhichhore students are dealing with college stud boy Raggie, played by a beefed up Prateik Babbar.

The second part of the trailer features Sushant, Shraddha, Varun, Tahir and others in their middle-aged avatars. They have an unexpected reunion at the hospital after one of the chhichhore meets with an accident.

Directed by Nitesh Tiwari, Chhichhore gets a new release date and hits screens on September 6 now.