Read inOther Languages
This Article is From Sep 08, 2018 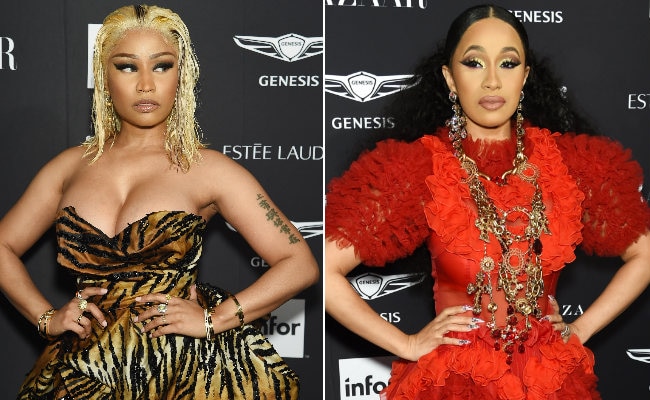 The Harper's Bazaar Icons party at New York's Plaza Hotel turned into a messy affair on Friday after a cat-fight between rival rappers Cardi B and Nicki Minaj took an ugly turn, videos of which are now crazy viral on social media. The feuding rappers plonked themselves on the trend's list after Cardi B allegedly approached Nicki Minaj's table in order "to address the lies Nicki was spreading," reported TMZ. Apparently, keeping Cardi B and Nicki Minaj's infamous rivalry and feud in mind, the team of security personnel had already devised a plan to avoid any nasty situation if Cardi B approaches Nick Minaj's table. Citing sources close to Cardi B, the TMZ report stated: "They believe security had a plan if Cardi came anywhere near, and one of them elbowed her in her face."

Cardi B was later photographed leaving the party with a visible lump on her forehead. Meanwhile, Cardi B also threw a shoe at Nick Minaj, the TMZ report stated. In the videos from inside the party, Cardi B can be seen trying to attack a fellow guest, who is said to be Nicki Minaj, while security personnel struggle to hold her back. "They were separated by security, but Cardi was still trying to get at her. She took of a giant red shoe and threw it at Nicki - who was being blocked up against a wall by huge security guard," a source present at the party told Page Six.

When your brother got to see the Cardi b and Nicki Minaj fight and sends you a video pic.twitter.com/5Tk5jtwZ6x

While there's been no comment on the matter from Nicki Minaj, Cardi B confirmed the fight with a lengthy expletive-laden Instagram post, in which she accused Nicki Minaj of threatening artistes to not work with her: "I addressed you once in person, I addressed you a second time in person, and every time you copped the plea!! But when you mention my child, you choose to like comments about me as a mother, make comments about the abilities to take care of my daughter is when all bets are ******* off!" Cardi B welcomed her first child, a baby daughter named Kulture, in July this year.

Only #CardiB can attend a high fashion event and leave barefoot with a lump on her head!!! #bazaariconspic.twitter.com/gqdwgQHJW4

After the brawl, Cardi B was reportedly escorted to a room, from where she later made an exit barefoot. Meanwhile, Christina Aguilera was said to be performing in the auditorium inside while the brawl took place outside.