Cannes 2022: Deepika Padukone And Sabyasachi - A Match Made In Sartorial Heaven 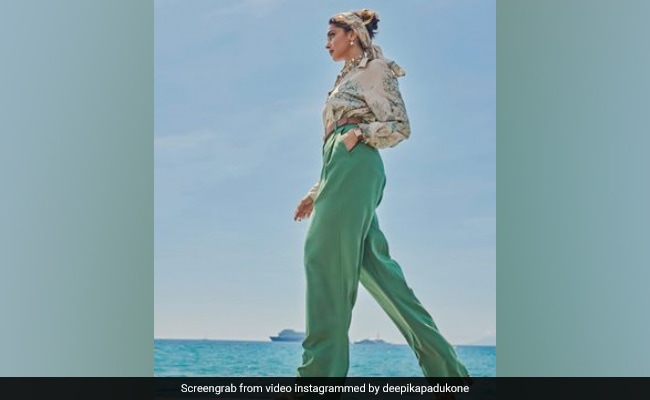 Deepika Padukone finally ditched Louis Vuitton and went for a Sabyasachi ensemble on the first day of the 75th Cannes Film Festival. While her big red carpet look is awaited, the actress surprised her fans in a shirt with tropical prints, which she paired with emerald green pants, a printed scarf on her head a statement neckpiece - all designed by Sabyasachi. The actress shared snippets of her day 1's OOTD on her Instagram stories and what's not to love? Deepika Padukone, has been a regular at Cannes for the last few years. For years, she had been representing make-up giant L'Oreal at the film festival. However, this year, she is attending as a jury member.

Here's a close up shot of the actress' statement jewelry.

A look at her hair and make-up.

So far, the actress had been showing up in Louis Vuitton outfits exclusively. The actress began her Cannes jury duty with a dinner on the eve of the opening ceremony of the 75th edition of the Cannes Film Festival in Cannes for which, she also picked a Louis Vuitton piece. Deepika Padukone checked into the French Riviera, dressed in a denim-on-denim look. An LV bag on the side and some glasses. Documenting the moments, the actress shared a video on Instagram, which she signed off with the words: "From Cannes, With love."

The actress has a super busy schedule ahead. She will co-star in the Hindi remake of The Intern, alongside Amitabh Bachchan. She will also be seen in Siddharth Anand's film Fighter, alongside Hrithik Roshan. She also has Pathan with SRK in the line-up and she will also feature with Prabhas in a film.