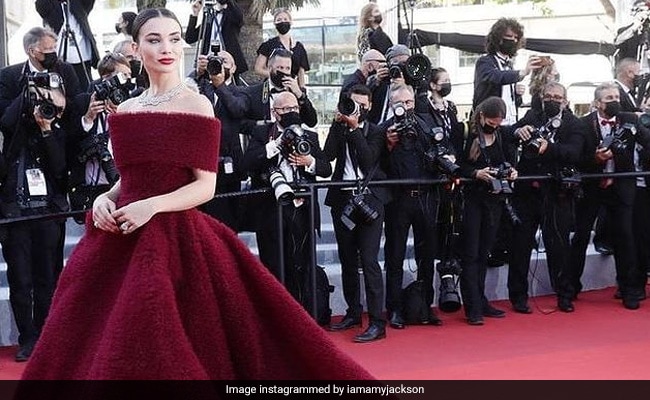 Bollywood actress Amy Jackson walked the red carpet of the 74th Cannes Film Festival, on Wednesday. While most other Bollywood actresses haven't made it to the celebrated film festival this year, Amy was seen adding the much-needed Bollywood stardust to the event. The actress exuded elegance as she walked down the aisle in a royal burgundy outfit. For her red carpet look, Amy Jackson wore an off-shoulder floor-grazing gown handpicked from the studios of Atelier Zuhra. She completed her look with a sparkling neckpiece from the collection of Chopard. Amy chose to tie her hair in a neat low ponytail for the event. Amy Jackson made sure that she shares her gorgeous look from the red carpet with her fans on Instagram. Sharing the pictures on Instagram, she wrote: "The red carpet moment." The 29-year-old actress added a red heart emoji to the caption and also thanked Chopard in French language. "Merci beaucoup (thank you very much) Chopard," she wrote.

As per AFP, the actress later attended the screening of the Hungarian film A Felesegem Tortenete (The Story Of My Wife).

Earlier in the day, Amy gave us a glimpse of how it looks like inside her make-up room as she gets ready for the Cannes Film Festival. In the picture that she shared on Instagram, Amy Jackson can be seen sitting while a make-up artist works on her. Amy can be seen dressed in a white and black outfit in the picture. "Takes a bloody village," she wrote in the caption of the post.

The 74th edition of the Cannes Film Festival took off in full swing on July 6. This year, the red carpet was rolled out amid strict restrictions due to the COVID-19 pandemic.