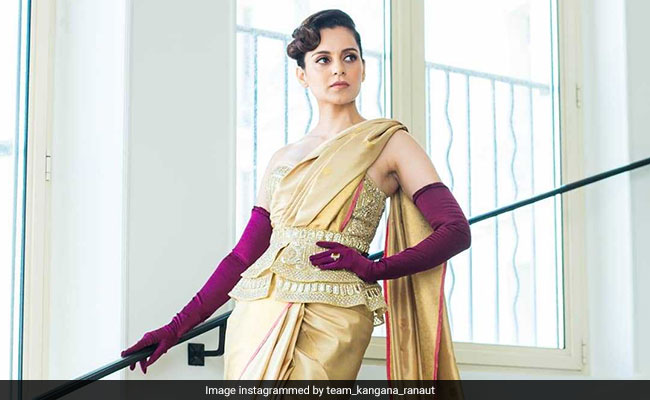 Ahead of her red carpet appearance at the Cannes Film Festival, Kangana Ranaut's team gave us a sneak peek of the actress' look for this year and we couldn't be more thankful. If we had to describe her look in a word, we would call it regal. The 32-year-old-actress, who represents the liquor brand Grey Goose, will be walking the red carpet in a golden saree handpicked from the studios of Falguni and Shane Peacock. Kangana accentuated her look with mauve coloured gloves. Kangana's ensemble was accessorised with an embossed golden peplum belt and her hair was immaculately tied in a bun, with a twirled flick on the side. She simply looked resplendent.

Kangana's team shared the actress' picture on Instagram on Thursday and the caption on it read, "The Queen has arrived. Kangana arrives at Cannes 2019 in a custom Falguni and Shane Peacock. Take a look at Kangana's first look at Cannes here:

Kangana's team gave us a glimpse of her preparatory session. "First day, first look. The calm before the storm," read the caption on the post.

This will be Kangana's second appearance at the Cannes Film Festival. Sharing her past experience at the French Riviera, the actress told news agency IANS: "I am looking forward to representing Indian cinema at such a prestigious platform with the global icon of luxury yet again. I made many lifelong memories, inclusive of both big and small moments."

Cannes Film Festival is scheduled from May 14-May 25 this year and Kangana will be present at the festival from May 16-May 18.