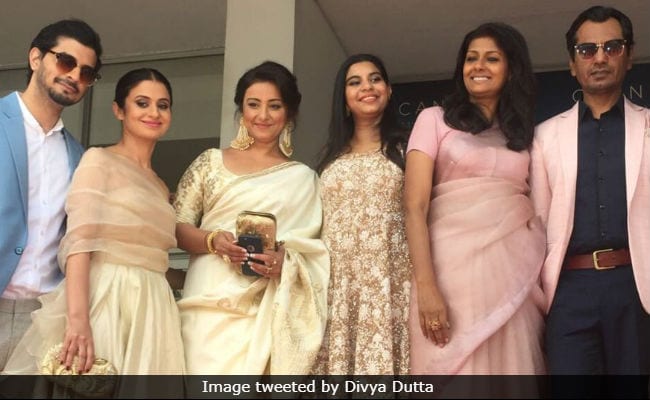 New Delhi: Actor-filmmaker Nandita Das' new film Manto was screened at the Cannes Film Festival on Sunday. Speaking about the film, she told news agency IANS that Manto doesn't put the film's subject, writer Sadat Hussain Manto, on a "pedestal." She said: "He was somebody who used to speak the truth despite all challenges he faced. For youth, it is extremely inspirational to see someone like him. I think it's a film where the audience will be able to take home something and everyone will relate with his personality." As team Manto geared up for the Cannes screening, the film's teaser hit the Internet on Saturday and went viral instantly.

Team Manto comprising Nandita Das, Nawazuddin Siddiqui, Rasika Dugal, Divya Dutta and Tahir Raj Bhasin along with actress Huma Qureshi attended the screening today at the French Riviera. Manto has been selected to compete in the Un Certain Regard section at the 71st Cannes Film Festival.

Walking the red carpet with the Manto team!!! And the lovely @humasqureshipic.twitter.com/Zu6LydDhF8

Speaking to IANS, Nandita Das said that it was a "smooth ride" for actor Nawazuddin Siddiqui to play the title role: "He has similar kind of personality in terms of views, anger, arrogance, sensitivity and humour. I think it was smooth ride for Nawazuddin to play this character. He used to tell me that he would not be able to do another film simultaneously because he had immersed himself so deep into the character of Manto."

Watch the teaser of Manto:

When she was asked if manto will be accepted across the border, Nandita said: "It's a story of a human being who happens to be a writer. There is no relation of borders between two countries. It's a very universal story. I don't think audience from Pakistan, Bangladesh and Sri Lanka will not be able to relate with it, it's very relatable story. I think everyone will relate with this film on different levels. We are not offending anybody."

Promoted
Listen to the latest songs, only on JioSaavn.com
A release date for Manto hasn't been set yet.