Manto Teaser: All About Nawazuddin Siddiqui's Battle Against The World 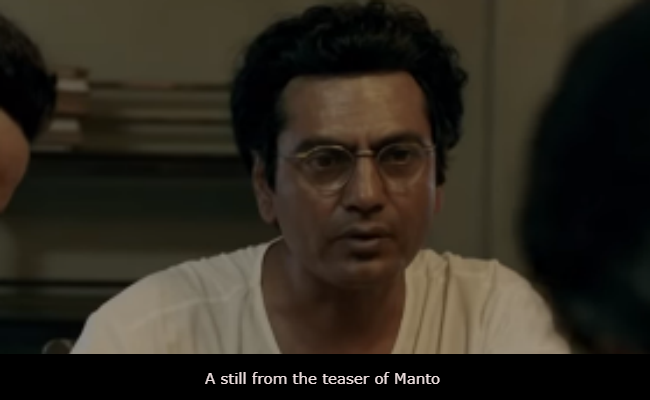 A still from the film Manto teaser (courtesy YouTube)

New Delhi: As the makers and actors gear up for the world premiere of Manto in the Cannes Film Festival, we got a glimpse of the much talked-about movie in the latest teaser dropped by the producers today. Manto, directed by Nandita Das is based on the life of writer Saadat Hassan Manto (played by Nawazuddin Siddiqui), whose writings were criticized for being obscene (so-called). In over a minute long promo, the teaser tries to draw your attention towards the writer's struggle to establish his idea in a world which tagged his work as vulgar and progressive. In the promo, it's Nawazuddin Siddiqui who holds your attention and is also the cynosure of all eyes. Manto's writings have influenced generations across borders, and his works were a real path-breaker. What is much evident from the teaser of Manto is the fact that the film encompasses around the life of the Urdu writer during a sensitive period of Indian history - post and pre-independence.

It's Manto against the whole world whose writings some people failed to connect with. But that does not daunt the writer's determination who is bent on showing what is real. Manto questions filtering his thoughts about what is persistent in society. The teaser is packed with his emotional ordeal, sense of humour and disappointment on the prospect of Partition. His protest against the society norms costs him his family's happiness and the writer's tiff with his wife (played by Rasika Dugal) is proof.

Watch the teaser of Manto here:

Manto has been produced by HP Studios, Filmstoc and Viacom 18 Motion Pictures. The film will be premiered at the French Riviera in the in the Un Certain Regard section. The film also stars Chandan Roy Sanyal, Atul Kumar, Ila Arun, Shashank Arora and Tahir Raj Bhasin. The release date of the film has not been announced.