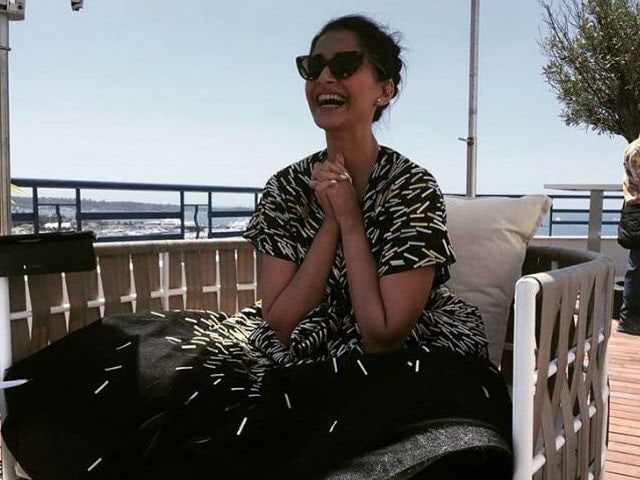 New Delhi: Actress Sonam Kapoor's Cannes outfits are giving fashionistas across the world major wardrobe goals. The 30-year-old actress looked stunning in a Ralph & Russo dress at a media interaction on her second day on the Croisette. She accessorized with Suhani Pittie ear cuff and studs.

Sonam's producer sister Rhea, who helps style her, shared this on Instagram on Monday:

Sonam added a dash of red which looked superb:

Meanwhile, Sonam was in a bit of a dilemma while choosing the perfect pair of heels for her splendid dress. The Neerja star, who has taken over the official Instagram handle of L'Oreal Paris, whom she is representing at the Cannes Film Festival for the sixth year, shared:

She struck a ballerina pose in the black heels:

But she settled for Paula Cademartori blue sandals. Nice pick.

Sonam walked the red carpet on her first day at the French Riviera in a white gown (again) by Ralph & Russo:

On May 15, Sonam started her Cannes sojourn with an Anamika Khanna ensemble:

This year, Sonam Kapoor will attend the amfAR gala, a charity event which aims to create awareness about AIDS, on May 19 for the first time. The actress will fill the spot left vacant by her colleague Aishwarya Rai Bachchan who will give the gala a miss due to work commitments. Aishwarya's Sarbjit, which was screened at Cannes, will release in India on May 20.