Can You "Spot The Difference" In These 3 Pics Of Alia Bhatt?

In the first photo, Alia looks pretty in a yellow dress while clicking a mirror selfie 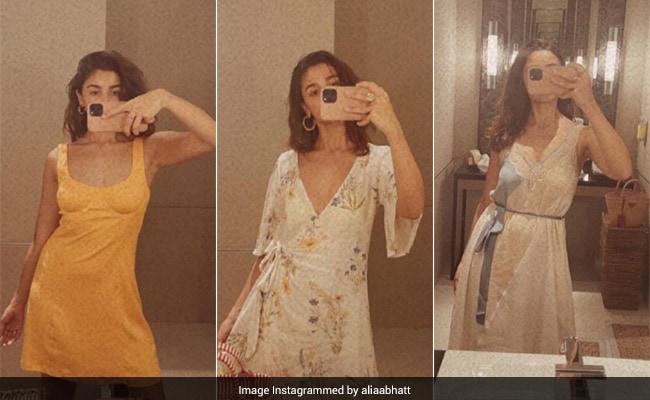 Hey Alia Bhatt fans, she has a task for you all. The actress, on Wednesday, posted three stunning selfies of herself and asked her Instafam to "spot the difference." All three pictures appear to be bathroom selfies. In the first one, Alia Bhatt looks pretty in a yellow dress while clicking a mirror selfie. The second photo shows her sporting a floral-print wrap dress while in third one, she can be seen wearing a white dress. In all the three pictures, we can see Alia's red and white handbag. However, the background in the third picture is quite different than the other two. In the comments section of her post, Alia's friend and celebrity stylist Anaita Shroff Adajania wrote: "The bag" while other users commented: "The dresses."

Recently, Alia Bhatt lit up Instagram with an adorable throwback picture of herself. Check it out here:

In terms of work, Alia Bhatt was last seen in her father's project Sadak 2. She co-starred with Sanjay Dutt and Aditya Roy Kapur in the film. Alia has many films lined up. She will next be seen in Ayan Mukerji's Brahmastra with boyfriend Ranbir Kapoor, Amitabh Bachchan and Nagarjuna Akkineni, in Sanjay Leela Bhansali's Gangubai Kathiawadi and in SS Rajamouli's RRR.

Gangubai Kathiawadi will release in theatres on July 30.