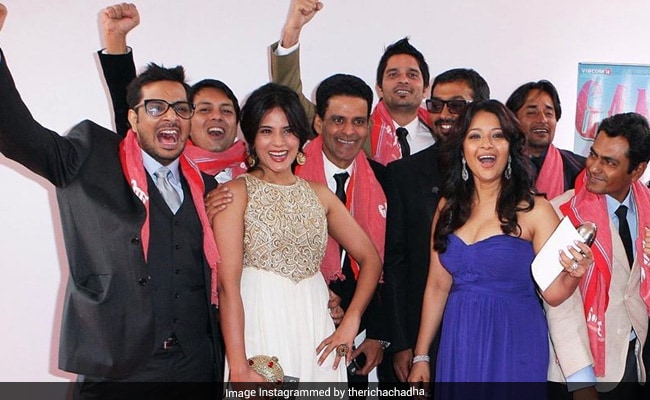 Richa Chadha, who has been actively sharing memories from her photo archive, posted a picture from the Cannes Film Festival on Thursday night. In her caption, the Masaan actress revealed that the picture was clicked about 8 years ago at the screening of Gangs Of Wasseypur. The star-studded photograph featured Richa Chadha along with the film's director Anurag Kashyap and the film's cast, including Nawazuddin Siddiqui, Manoj Bajpayee and Reema Sen. In her post, Richa asked her Instafam to spot Jaideep Ahlawat. The actor played the role of Shahid Khan - the patriarch of the Khan family in the film.

Richa Chadha gave a shout out to the actor, who is receiving massive praise for his portrayal of the character Hathiram Choudhary in Amazon Prime's web-series Paatal Lok and she wrote: "Who all can you spot? Since we're doing Festival de Cannes throwbacks now, here's my first appearance at Cannes ... 8 years ago! Gangs Of Wasseypur was screened for the director's fortnight! How many people can you spot here? There's also a clean shaven Jaideep Ahlawat, a fine actor, who's phenomenal in Paatal Lok who's finally getting his due! Jaideep, jiyo! Can you spot him? Who all can you see?" For those who couldn't spot Jaideep Ahlawat, the actor could be seen standing behind Anurag Kashyap and Manoj Bajpayee in the frame.

Who all can you spot??? Since we're doing @festivaldecannes throwbacks now... here's my first appearance at #Cannes ... 8 years ago!!! #GangsOfWasseypur was screened for the director's fortnight! How many ppl can you spot here ? There's also a clean shaven @jaideepahlawat , a fine actor, who's phenomenal in #pataallok ... who's finally getting his due! Jaideep, jiyo. Mwah ! Can you spot him? Who all can you see ? . . . . #throwbackthursday #Cannes #richachadha #actorslife #bollywood #GangsOfWasseypur