Can Captain Marvel Make Up For Lost Time? Marvel Was Slow To Let A Woman Be The Star 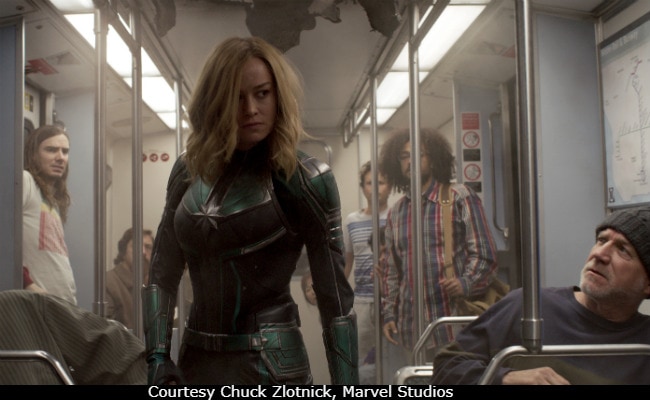 It's been 14 years since a Marvel Comics female superhero toplined her own movie. The film was Fox's Elektra, starring Jennifer Garner as the title fighter, and the release bombed so badly that it apparently scared off at least one Marvel executive from giving another superpowered woman the solo spotlight.

On Friday, Disney and Marvel Studios' Captain Marvel officially opens, starring Oscar-winning Brie Larson as the Air Force pilot whose DNA becomes combined with that of an alien after a crash. Industry projections say the movie could have a domestic debut north of $100 million - possibly topping the $103-million opening of DC's smash "Wonder Woman" two years ago.

If Captain Marvel succeeds commercially, if not critically, the long-standing question from many fans and industry experts could rise to a new pitch: What took Marvel so long to stop relying only on testosterone to lead its movies?

Many observers don't readily fault Kevin Feige, who has been the producer or executive producer on such franchises as Fox's X-Men and Sony's Spider-Man. He has helped lead several dozen superhero films, with Elektra being the only one that had starred a solo female superhero. Since launching the Marvel Cinematic Universe with 2008's Iron Man, the Marvel Studios president has guided his superhero releases to $17.5 billion in global gross - and not a single title has tanked.

Now Feige is betting that Captain Marvel, the first of the universe's 21 films to star a solo woman, will achieve historic success for the studio.

Hollywood had tried to sell the public on female-led comic-book movies nearly two decades ago, after 2000's X-Men and 2002's Spider-Man ramped up the current wave of superhero cinema. But the industry quickly got balky after only several attempts - including "Elektra," which grossed less than $57 million worldwide on a $43 million production budget.

"When Elektra failed, it was: 'Well, clearly, women can't carry a superhero movie,' " says Kelly Sue DeConnick, the comic-book writer and consultant on the Captain America movie, who launched the 2012 comic-book series in which fighter pilot Carol Danvers assumes her full role as Captain Marvel.

Nearly a decade later, Elektra was cited in an infamous leaked email, in which Marvel Entertainment's chief executive, Isaac Perlmutter, seemed to question the profitability of female-led superhero films. The email included links to the box-office results of "Elektra" and 2004's Halle Berry-starring Catwoman, which grossed $82 million worldwide on a $100 million production budget - and called both Catwoman and 1984's Supergirl a "disaster."

The year after that email was reportedly sent, Marvel Studios underwent a reorganization that, by most accounts, greatly bolstered the ability of Feige to green-light a diverse slate of Marvel Cinematic Universe movies, free of Perlmutter's interference. (Disney did not respond to requests for comment.)

Since then, Feige has helped shape a world featuring such female superheroes as Black Widow (Scarlett Johansson) and Scarlet Witch (Elizabeth Olsen) and gave Captain Marvel clearance to hit the Hollywood tarmac.

In recent years, Feige has notably hired directors, such as Thor: Ragnarok's" Taika Waititi and Black Panther's" Ryan Coogler, who had shown a gift for original storytelling on smaller-budget films. Marvel has mastered the art of epic effects; what it most wants from directors is the ability to make viewers care more about its characters.

For Captain Marvel, Feige and his studio selected the directing team of Anna Boden and Ryan Fleck, known for such intimate indie dramas as Half Nelson, Sugar and Mississippi Grind.

"We actually kind of approached it in the same way" as our indie films, Boden said. "We needed to find a character in the story that was going to get us really excited to live with for two years, peeling back the layers."

"And Captain Marvel," she said, was a very "good character to do that with."

"This definitely turned into a passion project," Fleck says. "We just dug in deeper and deeper."

Boden says their true-north as storytellers was the inspiring idea, in the comic-book words of DeConnick, about when a girl runs so fast that she falls down: "There's an instant, a fraction of a second before the world catches hold of her again. ... A moment when she's outrun every doubt and fear she's ever had about herself and she flies. In that moment, every little girl flies."

The movie draws from the reimagining of the character by DeConnick, who says she came aboard as a consultant for the project with skepticism. Would Hollywood commit to making this character as textured and empowered on the screen as she had become on the page - four decades after Danvers was introduced in comics as an objectified and marginalized pilot turned NASA security officer?

"The progress that women have made as far as not only our staffing in comics but also women (characters) being able to carry a comic-book title - if she was not hypersexualized or clearly packaged and aimed at a male audience - is relatively recent," says DeConnick, the daughter of an Air Force veteran who put her Danvers in a military-influenced jumpsuit instead of baring midriff.

"And if that is the case in comics, then when you bring literally billions of (Hollywood) dollars into it - it is the unfortunate truth that with any marginalized community, that representation is unbalanced," the writer says.

But arriving in Hollywood, DeConnick says Captain Marvel executive producer Victoria Alonso set the tone early when she told the writer that this movie, as a female superhero project, was vitally important to her.

For the directors, that meant arriving at a character whose strength defies her vulnerability - even as she prepares to become Marvel Studios' most powerful hero in April's epic follow-up, Avengers: Endgame.

"She's not perfect as a superhero," Boden says of their Captain Marvel, "yet she's strong, and she's powerful. ... That doesn't mean she's always confident, and that doesn't mean that she doesn't fall. We're built to fall."

Beyond Carol Danvers' story, Boden has embraced another tale of representation: By climbing aboard Captain Marvel, she became the first woman to be in the director's chair for a Marvel movie. She's also one of the few women to be credited as a screenwriter in a Marvel film. "Emotionally, I don't feel like a trailblazer at all," says Boden, noting that it is "very hard for me to see myself in that way."

Yet since completing the film and encountering fans, Boden says she has embraced how important it is to be a symbol for young women and girls. By being front and center, she says, perhaps "we're not having this conversation in five and 10 years" about representation for female directors.

Captain Marvel arrives nearly two years after Warner Bros. captured the cultural zeitgeist with Wonder Woman, directed by Patty Jenkins and starring Gal Gadot. The movie's critical and commercial success - it was the first female-directed film to top $100 million in its domestic opening - heightened the sense that Marvel was slow to green-light a solo film for a female superhero.

Today, though, DeConnick says: "I am grateful to all involved with 'Wonder Woman,' because everything that they did made Captain Marvel easier."

So what does the onetime skeptic think of how Marvel Studios has handled her Captain Marvel as a heroic woman?

DeConnick has seen the movie three times - and each time was deeply moved.

"I didn't understand," she says, "the effect it would have on me."