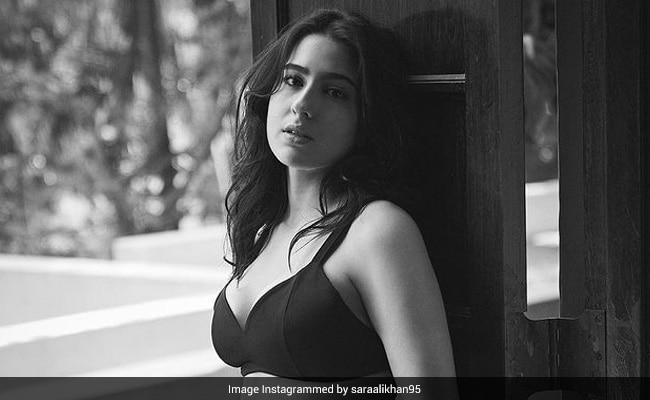 Actress Sara Ali Khan sure is a stunner and proof of that is her latest Instagram post. The young actress just made our day even better with her absolutely stunning pictures. The monochrome pictures feature Sara Ali Khan wearing a black bralette and matching thigh-high slit skirt. The pictures are from her recent photoshoot with celebrity photographer Rohan Shrestha. While in the first two pictures, Sara can be seen looking at the camera with an intense look on her face, the third picture captures a candid shot of Sara. The last picture captures Sara from behind as she poses for the camera.

Sara complemented the pictures with a short poem. "Kash kabhi yu ho na hasrate na junun ho. Tera khyaal ho aur tu ho, dil me bas sukoon ho," Sara wrote in the caption. She did not reveal who wrote the poem. The 25-year-old actress' post received scores of comments from her fans. Most of her fans dropped heart and fire emojis in the comments section of the post.

Sara's last two Instagram posts have also been from her recent photoshoots. While one post features her dressed in a bright red lehenga, she can be seen dressed in a pink floral lehenga from Manish Malhotra's couture in the other post.

Check out the posts here:

Last week, Sara gave us a glimpse of her Eid celebrations with a picture that features her with her father, actor Saif Ali Khan, and brother Ibrahim Ali Khan. The picture also features Saif Ali Khan and Kareena Kapoor's sons Taimur Ali Khan and Jeh.

In terms of work, Sara Ali Khan was last seen in David Dhawan's Coolie No. 1.