Brahmastra: Behind The Scenes Of Ranbir Kapoor And Alia Bhatt's Film

"Very emotional moment for me, because of how long and challenging that journey has been, on every single shot," wrote Ayan Mukerji 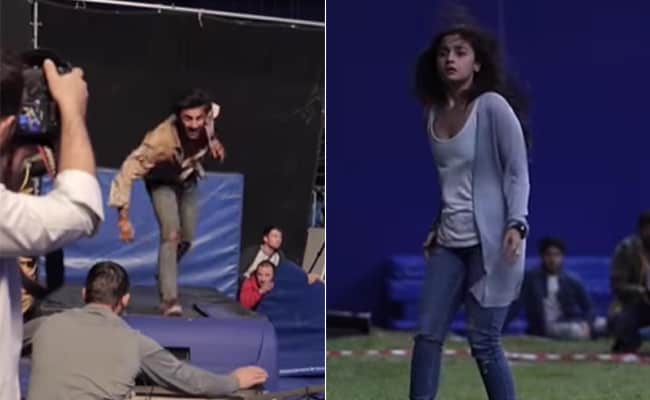 A still from the video. (courtesy: ayan_mukerji)

As Brahmastra is only five days away to hit the theatres, Ayan Mukerji has shared a new clip and this time, he has shared a behind-the-scenes (BTS) video. In the video, we can see Ranbir Kapoor, Alia Bhatt, Amitabh Bachchan, Nagarjuna and Mouni Roy preparing hard for the role. Sharing the video, Ayan wrote a long note expressing his love for the movie. He wrote, "Where Spirituality meets TECHNOLOGY... 5 DAYS TO GO... Yesterday was the first time, I saw every shot in Brahmastra - finally finished, polished and ready for it's audience!"

He added, "Very emotional moment for me, because of how long and challenging that journey has been, on every single shot, from the drawing board to the big screen! Felt right to share some Behind-the-Scenes today, to celebrate so many years of growing through technology!(and hanging out with blue screens!)".

Helmed by Ayan Mukerji, Brahmastra stars Ranbir Kapoor, Alia Bhatt, Amitabh Bachchan, Nagarjuna and Mouni Roy. In the movie, Ranbir plays the role of Shiva, who has the power of Agni (fire) while Alia plays his love interest. Amitabh Bachchan is Ranbir's Guru (Teacher) in the movie. Produced by Karan Johar's production house Dharma Productions, the film has been in the news since 2014. It will release in three parts, and the first part,  Brahmastra Part One: Shiva, is slated to release on September 9. It will release in five regional languages - Hindi, Telugu, Tamil, Kannada and Malayalam.