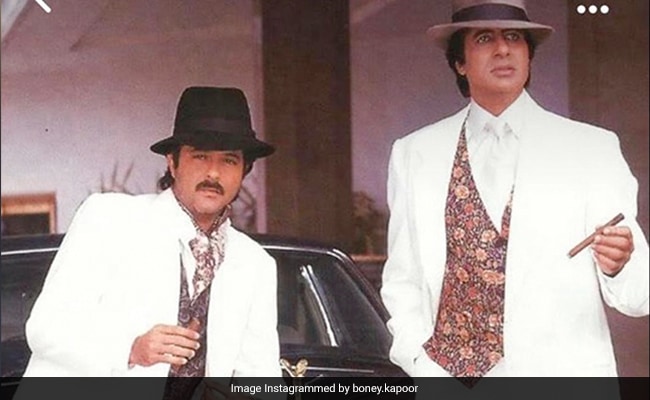 Amitabh Bachchan and Anil Kapoor are posing together in the picture. (courtesy: boney.kapoor)

If there was a contest on who has the best throwback images in B-town, Boney Kapoor would have an easy victory. Now, Boney Kapoor has begun the week with a major throwback album on Instagram and we can't thank him enough for the vintage images. The pictures, featuring Amitabh Bachchan and Anil Kapoor, are from the “1993/94 historic tour of US, Canada, George Town (West Indies) and the UK.” Boney Kapoor's wife, the late actress Sridevi and Anupam Kher were also part of the tour, the producer revealed in the caption. The first image shared by Boney Kapoor features Amitabh Bachchan and Anil Kapoor in an all-white look with cowboy hats, striking a pose for the lens. The next photo is what appears to be the tour's poster. In it, we also get a glimpse of superstar Sridevi.

In other images, the two superstars are also seen dancing and singing. Boney Kapoor, in the caption, wrote, “1993/94 Historic Tour of US, Canada, George Town (West Indies) and the UK. Electrifying performances by Amitabh Bachchan, Anil Kapoor, Sridevi and Anupam Kher with Kalyanji Anandji and their team of singers and musicians.”

Before this, Boney Kapoor shared an image of his daughter Janhvi Kapoor, alongside Amitabh Bachchan's grandchildren Navya Naveli Nanda and Agastya Nanda. In the caption, he said, “Memories of childhood Agastya, Janhvi and Navya.”

This was preceded by another throwback picture featuring Boney Kapoor's daughter Anshula Kapoor with his niece, Rhea Kapoor. Rhea is the younger daughter of Boney's brother, actor Anil Kapoor.

Not too long ago, Boney Kapoor also shared a photo of his son Arjun Kapoor and Janhvi. In the image, Arjun is seen playing with Janhvi's pigtail. In the caption, he said, “Arjun and Janhvi in a playful mood in Burlington (Vermont, USA) during the shooting of our film Khushi.”

Boney Kapoor, who has worked for decades as a producer, will be making his acting debut with Luv Ranjan's next film with Ranbir Kapoor and Shraddha Kapoor.