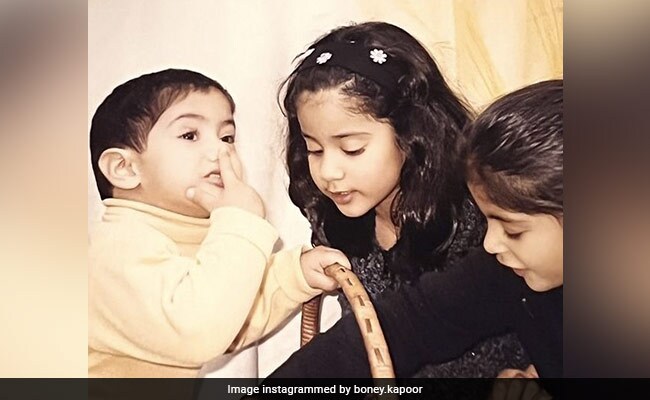 Producer Boney Kapoor is always on time to serve us a fresh dose of nostalgia. Just a day after he shared an adorable childhood picture of his daughter Anshula Kapoor and niece Rhea Kapoor, he has uploaded another throwback photo. Giving us the perfect Flashback Friday moment, Boney Kapoor treated us to yet another picture, this time of three star kids. Any guesses who they are? Hint: there is a Bachchan family connection. In the snap shared by Boney Kapoor, one can spot two little girls – Janhvi Kapoor and Navya Naveli Nanda, and a baby boy, Navya's brother, Agastya Nanda. “Memories of childhood Agastya, Janhvi & Navya,” the filmmaker wrote in the caption.

On Thursday, the film producer had shared a photo on Instagram in which a little girl is seen holding a baby. Giving details in the caption, Boney Kapoor wrote, “Anshula in Rhea's safe arms,” along with a couple of heart emoticons. Anshula Kapoor was quick to react to her father's post and called Rhea Kapoor “best” along with a heart emoji.

Boney Kapoor has quite the collection of throwback pictures and his Instagram timeline is proof. On Janhvi Kapoor's birthday, Boney Kapoor penned a sweet note alongside a childhood picture of his daughter. He wrote, “Joy of our lives, remain the way you are, simple, down to earth, respectful to everyone, spreading warmth, these are your qualities which will take you beyond the moon. Happy birthday beta.”

Not just of his kids, Boney Kapoor also often treats us to throwback images featuring himself.

Meanwhile, on the work front, Boney Kapoor will soon make his acting debut in Luv Ranjan's next. The film stars Ranbir Kapoor and Shraddha Kapoor in the lead roles.