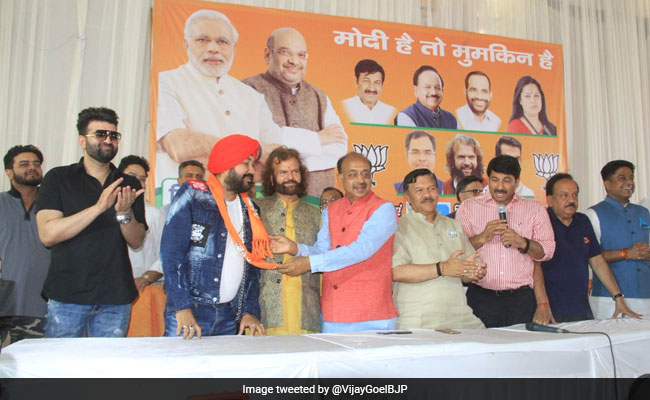 Singer Daler Mehndi, who joined the BJP today, had an admirer who couldn't resist but tweet a brief line from the chorus of the Punjabi singer's 1995 super hit number "Bolo Ta Ra Ra..."

Daler Mehndi, known for his folkie yet celebrated debut with "Bolo Tara Ra Ra" to the glitter and glam of the rock-inspired "Balle Balle" and the patriotic "Rang De Basanti", became the second celebrity to join the BJP this week after actor Sunny Deol.

Earlier this week, singer Hans Raj Hans was also named as one of the seven BJP candidates for Delhi, which votes on May 12.

It is not clear whether the Daler Mehndi will contest the national election. He had in 2013 joined the Congress, just before the Delhi assembly election. He had also composed and sung a campaign song for the party.

His brother Mika is one of the biggest singers in Hindi films today.

In the past, Daler Mehndi was accused in an illegal immigration case. In 1998 and 1999, he had allegedly taken at least 10 migrants, disguised as dancers in his troupe, to the US and returned without them.

He and six others, including his brother, were charged in 2003 with cheating people by promising to take them abroad. Last year, Daler Mehndi was sentenced to two years in prison. The sentence was suspended and he was released on bail after he appealed against the conviction.