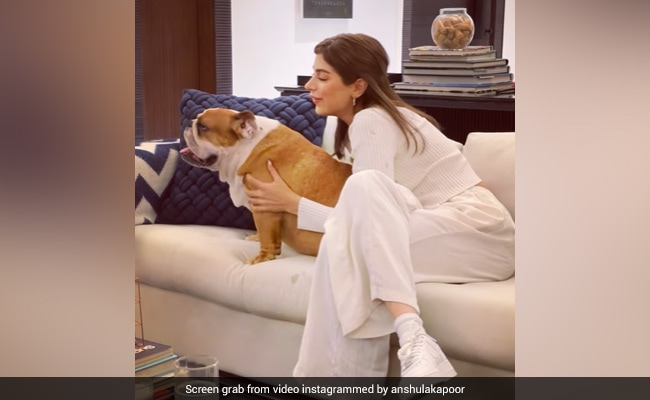 On Khushi Kapoor's 22nd birthday today, her half-sister Anshula Kapoor revealed that the birthday girl is everyone's favourite including her pet dog Max. But, what caught our attention is Khushi and Anshula's cousin Shanaya Kapoor's reaction to the post. Sharing a couple of pictures and a video of Khushi Kapoor, Anshula wrote, "Happy birthday to everyone's favourite cutie Khushi Kapoor (yes, even Max has chosen his fav) May this year bring you all the clarity you desire, May you always be surrounded by a sea of unconditional love, may you always feel endless joy, and may you unquestionably & unabashedly always remain true to who you are... You deserve only the best of the best... I miss you! ILY." In one of the videos from Anshula's post, Khushi can be seen cuddling Anshula's pet Max, who can be seen enjoying the session.

Reacting to Anshula's post, Shanaya Kapoor dropped two different comments. In one of the comments, Shanaya dropped many red hearts, while in the other comment, She revealed that Max, who loves Khushi, never pays attention to her. Shanaya's comment read, "Max legit never gives me attention." Anshula was quick to respond to her cousin's comment and wrote, "bro same" with a teary-eyed emoji.

Khushi Kapoor is Anshula's half-sister. While Anshula is the daughter of Boney Kapoor with his first wife Mona Shourie Kapoor, Khushi is Boney's daughter with his second wife and late actor Sridevi.