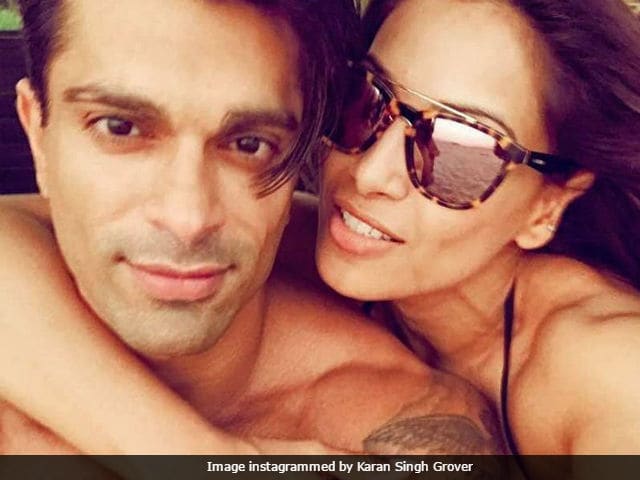 New Delhi: Actor couple Bipasha Basu and Karan Singh Grover are by the beach (again), this time to celebrate their first wedding anniversary. Bipasha and Karan, who got married on April 30, last year, have been posting boomerang videos of themselves which prove they are super thrilled for their big day and have already started the celebration in style. Bipasha posted a split of jump boomerang video with caption: "Reunited with my love. Fun times," while Karan posted a split of boxing video and captioned it as: "She makes everything look easy." Bipasha Basu and Karan Singh Grover met on the sets of 2015 film Alone and got married a year later in a lavish ceremony.

Take a look at Bipasha and Karan's videos here:

She makes everything look easy

Bipasha Basu and Karan Singh Grover have been sharing plenty of throwback pictures and videos remembering their wedding ceremonies. A couple of days agao, Bipasha shared this emotional video from one of the ceremonies and wrote: "You make me Feel @iamksgofficial. It's going to be a year soon. It's been amazing till now. Our relationship's key fundamental foundation is friendship, it's selfless and loving."

Promoted
Listen to the latest songs, only on JioSaavn.com
Watch the video:

You make me Feel @iamksgofficial It's going to be a year soon .. this clip from the 28 th of April 2016 ,when we officially became husband and wife It's been amazing till now... our relationship's key fundamental foundation is friendship ... it's selfless and loving.. #monkeylove

Bipasha Basu dated actor John Abraham and Harman Baweja before she got married to Kran Singh Grover. This is Karan's third marriage. He was first married to television actress Shraddha Nigam and later to his Dil Mill Gaye co-star, actress Jennifer Winget.