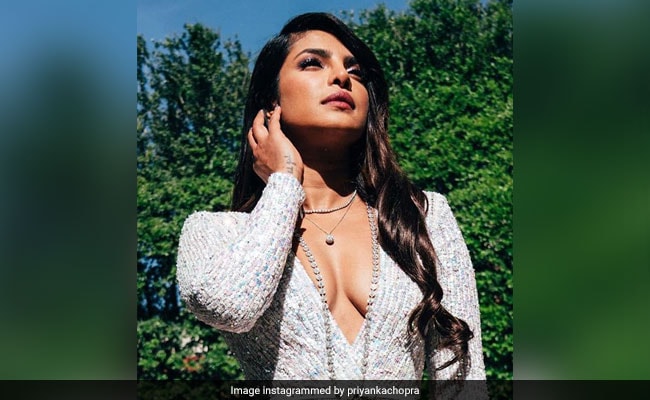 Priyanka Chopra. Enough said. Spot her on the red carpet and you'll know how much Hollywood's paparazzi adore her. Priyanka Chopra stole much of the limelight from the Jonas Brothers at the MGM Grand Garden Arena in Las Vegas on Wednesday as she arrived on the Billboard Music Awards red carpet in a sequinned and belted ensemble, looking absolutely stunning. While details of Priyanka Chopra's red carpet fashion flooded international fashion sites, we spotted that the actress perfected her look with careful attention to the tiniest of details. The 36-year-old actress handpicked the ensemble from the collections of her favourite designer Zuhair Murad. Back in 2016, Priyanka had made her Oscar debut in a column Zuhair Murad gown.

Priyanka's collection of neckpieces piqued particular interest - she wore a studded choker of sorts, a pendant and a diamond stringed necklace to match her otherwise sparkly look. Meanwhile, did you see her shoes? She totally rocked the naked shoes look, often spotted on Kim Kardashian, Kendall Jenner and Rihanna. There's even a touch of glitter on Priyanka's white belt.

Tiffany will always be special for Priyanka Chopra actually. Nick Jonas shut down an entire Tiffany store to pick out an engagement ring for Priyanka, which reportedly came with a price tag of $200,000. Tiffany also hosted a bridal shower in New York for Priyanka ahead of her wedding, which was attended by the likes of Oscar-winning actress Lupita Nyong'o. For the Tiffany party, Priyanka apparently wore jewellery pieces (necklace and ear-studs) hand-picked from Tiffany's collections worth $1 million, which roughly translates to Rs 7.39 crore.

Meanwhile at the Billboard Music Awards, Priyanka Chopra and Nick Jonas kissed mid-way through his performance and we can't even...

Priyanka Chopra and Nick Jonas are expected to make a couple entry to the Met Gala next week.