Divya Agarwal's fans accuse Karan Johar of being biased against her for no reason. 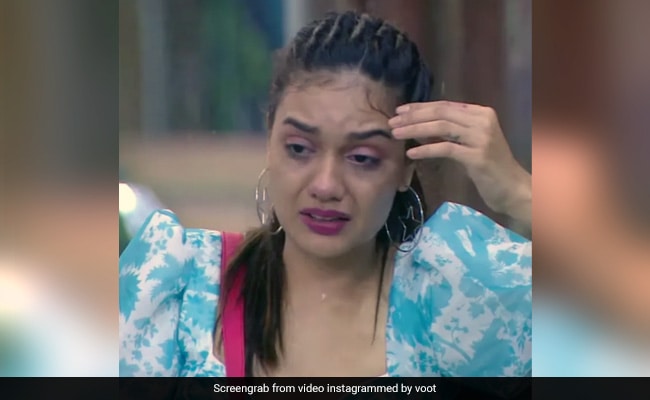 Bigg Boss OTT contestant Divya Agarwal is upset about host Karan Johar's remarks from the last Sunday Ka Vaar episode. Divya, who is friends with co-contestant, Bhojpuri actress Akshara Singh, opened up about the episode. The two were having a conversation after Divya's connection Zeeshan Khan got evicted from the Bigg Boss OTT house. Divya told Akshara that Karan had no right to talk to her in the way he did. Divya stood her ground and said that she won't change herself because of other people's judgements. Divya alleged that Karan's words have aggravated her suffering on the show. She said, "Karan Johar ne mere barey mein boli hain aisi baatein jiske wajah se mujhe yaha pe suffer karna par raha hain (Karan Johar has spoken such things about me for which I am suffering here)."

Divya Agarwal also complained that Karan Johar did not know her well enough to pass such remarks. According to Divya, Karan should've understood that people blindly believed his words because he is one of the most celebrated persons in Bollywood. Addressing Karan, Divya said, "Woh obviously tum jo bologey uspe bharosa karenge. To tum mere bare me aisa kaise bol sakte ho (They obviously trust your verdict. So why should you talk mean things about me)?"

In the Sunday Ka Vaar episode, Karan Johar had warned Divya Agarwal not to take his name in the house if she can't give respect. A furious Karan then added, “Bigg Boss has summoned you [Divya] as a contestant and I am the host. So this line between the two of us will always be there.”

This was not the first time when Divya Agarwal was on Karan Johar's target list. In the very first Sunday Ka Vaar episode, Karan had pulled one of Divya's earlier remarks on the show and asked, "Tell me Divya ma'am, if you don't need this show why are you here? This is no party." He later pointed at the connection between Shamita Shetty and Raqesh Bapat and told Divya, "Mujhe lag raha hai ki inka ghar ap tod rahi hai (I think you are causing a rift in their connection)."

Divya Agarwal's fans have been accusing Karan Johar of being biased against her for no reason. What are your views on this?