Tina Dutta handed over a heart to Abdu Rozik and said, "He is a charmer." 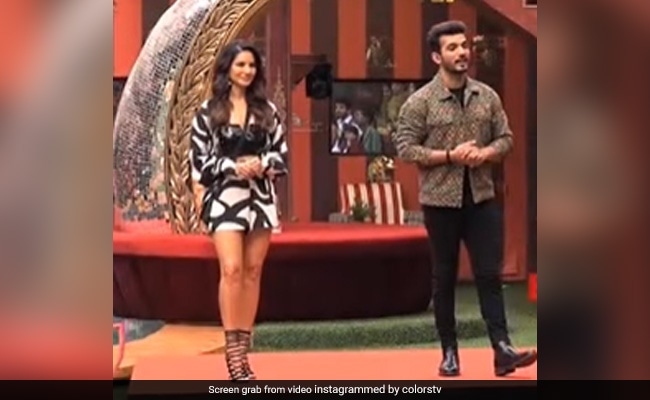 The latest episode of Bigg Boss 16 was special for not one but two reasons. Actress Sunny Leone and TV star Arjun Bijlani appeared as special guests during the Shukarvaar Ka Vaar episode. The duo, who promoted their upcoming reality show MTV Splitsvilla Season 14, had a blast with the contestants. Along with all the fun moments, the actors also made the housemates reveal who won and who broke their hearts on the show. Sunny Leone and Arjun Bijlani, during a game, asked the contestant to hand over a red heart cut-out to those who won their hearts. Ankit Gupta walked to his Udaariyan co-star Priyanka Chahar Choudhary and gave her the cut-out. Then came Tina Dutta. She handed over a heart to Abdu Rozik and said, “He is a charmer.”

In the next segment of the game, Sunny Leone asked the contestants about who broke their hearts inside the Bigg Boss house. Tina gave a broken-heart cardboard cut-out to Shalin Bhanot. She justified her action by saying, “Bahut jhagda karta hai [he argues a lot].” Next, Nimrit Kaur Ahluwalia gave one to Gautam Singh Vig and said, “Inke saare actions ko dekh ke (lagat nahi) main unhe Kabhi trust kar paungi [seeing all his actions, I don't think I can ever trust him].”

When given a chance, Ankit Gupta gave a broken heart to Nimrit Kaur Ahluwalia. He explained that she had abused his love-interest Priyanka Chahar Choudhary. To this, Nimrit replied, “Haan maine abuse kiya [yes, I abused her] and am not apologetic about it.”

Watch the confessions by the contestants here:

Bigg Boss 16: Nimrit Kaur Ahluwalia On Her Battle With Depression