Karan Kundrra was planning a game strategy when  Tejasswi Prakash asked him about Shamita Shetty. 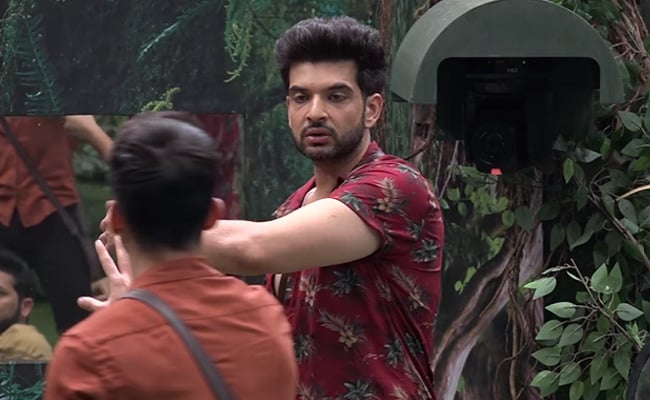 Bigg Boss 15: Karan Kundrra in a still from the show

Bigg Boss 15 contestants, Junglewasi Karan Kundrra and Gharwale Shamita Shetty, are once again in the spotlight. This time, Karan was asked if he likes the actress. Surprised? It all happened when Karan and other Junglewasi, Tejasswi Prakash, Akasa Singh, Vidhi Pandya and Miesha Iyer, were working on a game plan in the kitchen area. As the team was discussing the strategies, Tejasswi asked Karan if he liked Shamita. To which, Karan replied that he has barely spoken to her. "I have never ever spoken to her in my life and either way, she has a very strict personality," he added.

This isn't the first time that Shamita Shetty has become the centre of discussions over romantic relationships. In the spinoff Bigg Boss OTT, which ended only a few weeks ago, Shamita grew closer to her co-contestant Raqesh Bapat. They were seen growing fond of each other. In fact, Raqesh and Shamita have been seen spending good times together even after the show ended. Currently, Raqesh is rooting for Shamita on social media for her performance in Bigg Boss 15.

The 15th season of Bigg Boss has romance brewing in it. It's not just the speculations about Shamita Shetty and Karan Kundrra. Contestants Meisha Iyer and Ieshaan Sehgaal are often seen together. A clip of their budding romance was also shared on Instagram.

A while back, Karan Kundrra got into a brawl with Pratik Sehajpal after the Gharwale broke a latch of the shower door while Vidhi Pandya was taking a bath.

Bigg Boss 15 is being hosted by Salman Khan.