Bigg Boss 15: Karan Kundrra Confesses That He Is "Fond Of" Tejasswi Prakash

The two were seen having a candid conversation in the garden area. 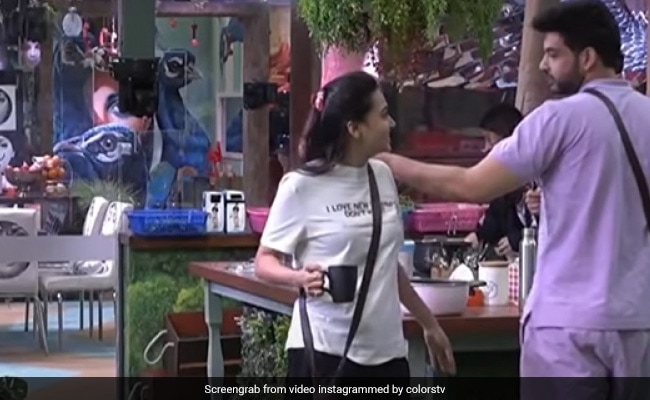 Is romance in the air in Bigg Boss 15 house? Well, it sure looks like it. We are not talking about the relationship between Miesha Iyer and Ieshaan Sehgaal that has managed to grab eyeballs in the very first week of the show. It is a candid conversation between housemates Karan Kundrra and Tejasswi Prakash that has led to fans speculating that the two may well be on the path to developing a special bond. On Monday's episode of Bigg Boss 15, Karan and Tejasswi were seen having a candid conversation in which they revealed that they are fond of each other.

While there was no explicit mention of the two mustering romantic feelings for each other, Karan Kundrra revealed that he is very “fond of her” and did not want to see Tejasswi Prakash move from the Jungle section of the house to the Ghar section, last week.

The confession came on the heels of Tejasswi Prakash stating that she was annoyed that she was not able to get through to Karan Kundrra over the last few days. She said, “I am feeling a bit distant from you for a few days. It is becoming a bit difficult to converse with you, approach you or get through you. It is annoying at times. We have never spoken together ever. Yeh hamara shaayad pehla footage hoga together. [I think this is the first time our footage will come together].”

Adding that the people around Karan Kundrra were acting territorial, Tejasswi said, “I thought when you said our vibes match and we talk together, it will be nice. But that is not happening.”

Responding to this, Karan Kundrra said, "I am extremely fond of you. Mujhe expression issue hai [I have an issue with expressing my feelings]. I wasn't happy when you went inside the house. I was even making faces if you remember. It took a lot for me to actually say, 'Teju, I miss you a lot.'"

Karan Kundrra also added that he would never be able to have such a conversation in front of a third person, to which Tejasswi Prakash also agreed. She also asked Karan why he did not come to find out how she was feeling when she was upset. To this, Karan said that during tasks whenever someone tries to tackle or inadvertently hurt her, he would be the first one to protect her.

Explaining that he would be there for her in the future as well, Karan Kundrra added that he would be more vocal. “You be you...I am telling you that I need to be given rights. So now that you know, I will be there for you.” To this Tejasswi said, “Of course, you can,” referring to him being able to approach her for conversations.

Clips of the interaction were shared on social media by a fanpage of Karan Kundrra. You can watch it here:

Karan and Teju sorting their differences out and getting on talking terms again.#KaranKundrra || #Tejran#BiggBoss15 || #BB15pic.twitter.com/7Sa1vdQWcV

Fans of the stars have already begun to celebrate the possibility of a relationship coining the moniker ‘Tejran' for the duo. We can't wait to see how this equation pans out during the course of Bigg Boss 15. Tell us what you think of this conversation between Karan Kundrra and Tejasswi Prakash.