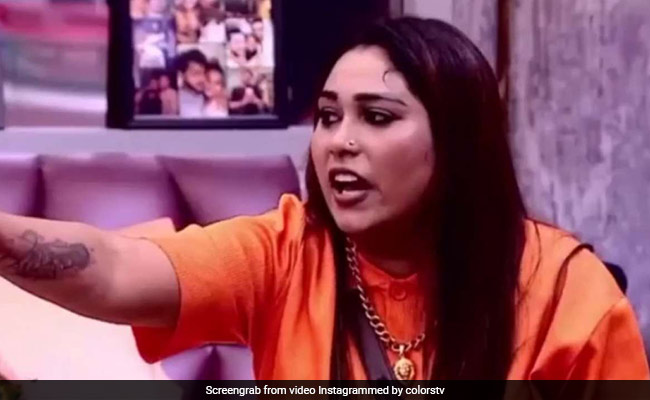 Bigg Boss 15: A still from the house. (Image courtesy: colorstv)

Tensions are rising in the Bigg Boss house and understandably so. After all, the contestants have lost access to their quota of weekly ration due to the callous behaviour exhibited by them over the past several weeks. The latest episode of Bigg Boss 15 has the contestants staring at an empty pantry because they were caught breaking rules repeatedly. Due to this, the housemates had to take part in a task to win back the groceries. But this task too failed to reach fruition as Shamita Shetty and Afsana Khan were caught breaking rules even after the task started.

In Monday's episode, Bigg Boss can be heard chastising Shamita Shetty for repeatedly speaking in English and not Hindi, as is the rule in the house. Afsana Khan, on the other hand, was seen sleeping during the task hours. This, even after the contestant was asked to sit up and not doze off by captain Umar Riaz.

Following Bigg Boss' order to cancel the task, contestants panic over how they would get through the week with just wheat, potatoes and onions. Jay Bhanushali, in particular, is seen scolding Afsana Khan for sleeping despite being told not to do so by members of the house.  This leads to Afsana Khan having an emotional outburst where she screams and hits herself.

Shamita Shetty, meanwhile, walks away into the bedroom declaring that she won't eat the whole week and that the contestants can take her share of food too. She is then seen to be angry at Bigg Boss saying that not just her, but all those who have spoken in English should have been named and shamed.

“Baaki logon ka bhi naam lena chahiye tha, jinhone English mei baat ki hai (The names of the others who spoke in English should also have been taken),” she declares angrily to Jay in a promo video shared by Voot.

Bigg Boss 15: Afsana Khan Tries To Hurt Herself After Being Denied VIP Ticket