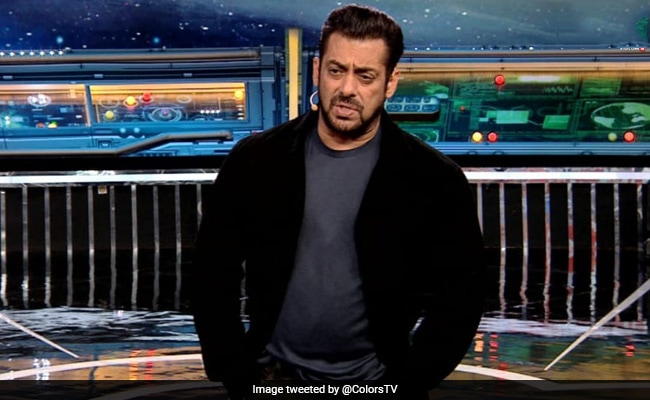 Bigg Boss 14: Salman Khan in a still from the show. (courtesy ColorsTV)

On Saturday's 'Weekend Ka Vaar' episode of the TV reality show Bigg Boss 14, the show's host Salman Khan interacted with all the contestants. The episode began with Salman Khan expressing his thoughts out loud and one of the topics that he brought up was nepotism. Salman schooled contestant Rahul Vaidya on nepotism after the singer had addressed Jaan Kumar Sanu (son of veteran singer Jaan Sanu) as a product of "nepotism" during an episode earlier this week. Salman Khan, began the discussion by asking Rahul Vaidya that if someone's parents have done something for the child, would that be called "nepotism"?

Later, Salman Khan gave several examples to prove his point. The actor asked Rahul Vaidya if he likes actor Sanjay Dutt (son of late actors Sunil Dutt and Nargis) and added, "Tell me, Rahul, do you like Sanjay Dutt? His father Dutt Sahab launched him but that film did not work as much as Love Story did. But Sanju Baba continues to rule." He then asked Rahul Vaidya, "Did Raj Kapoor do wrong by launching Rishi Kapoor? Was Dharmendra wrong in launching Sunny Deol? They launched their own kid and also launched so many other kids." Citing Ajay Devgn's example whose father Veeru Devgan was an action director, he added, "Ajay Devgn is today one of the greatest stars."

Salman Khan's examples were not just confined to people with a film background. The actor also talked about stars like Shah Rukh Khan, Jackie Shroff and Akshay Kumar, who had no connections in the industry but still managed to make it big. "Mehnat ke dum par ye sab 20-30 saal tike hue hai (They are here for such a long time because of their hard work)," Salman said.

Salman pointed out that if one has the talent, he or she will last, irrespective of their background. "Jisme woh baat hai, wo chalega, aur jisme baat nahi hai wo ghar ki tijori, maata-pita ki tijori khaali karke jayega (one who possesses talent will sustain in the industry, and one who doesn't will not.)"

The actor added, "But in this industry, it is not possible to survive like that. People only survive with the audience's love, talent, and hard work."

Here's a snippet of what Salman Khan said on Sunday's episode of Bigg Boss 14:

For the uninitiated, Jaan Kumar Sanu, occupied a spot on the list of trends last week after fellow contestant and singer Rahul Vaidya nominated him for eviction, calling him a product of "nepotism." While nominating Jaan, Rahul Vaidya said, "I would like to nominate Jaan Kumar Sanu because I hate nepotism. Whoever has come on the show, they've come on the basis of their hard work. Jaan is on the show because he's someone's son."

Responding to Rahul's "nepotism" remark, Jaan said, "I'm fortunate that my Mr Kumar Sanu is my father. Not everybody is that lucky. Unfortunate for you." He later explained that his parents got separated when he was very young and that he has been raised by his mother.