Bigg Boss 13: Kartik Aaryan Thanks Shehnaz Gill For Gifting Him A 'Masterpiece'

"What a lovely piece of art," wrote Kartik Aaryan Kartik Aaryan, who is currently busy with the promotional duties of his forthcoming film Love Aaj Kal, recently visited the Bigg Boss house, where he and his co-star Sara Ali Khan interacted with this season's contestants and the show's host Salman Khan (but more on that later). This is the story of the special gift that he received from one of the contestants on the show. Kartik, on Tuesday, shared a picture of a portrait made by Shehnaz Gill on his Instagram story and he captioned it: "What a lovely piece of art. My portrait by Shehnaz Gill. Thank you for this masterpiece." During a segment of Weekend Ka Vaar episode, Sara and Kartik entered the house, where Shehnaz gave Kartik a grand welcome. Kartik also stated that Shehnaz is his favorite contestant. During the episode, Kartik and Sara engaged the housemates in some fun games and gave them tasks. In one of the task, Shehnaz and Rashami Desai had to sketch Kartik Aaryan. No points for guessing, Shehnaz won the task. 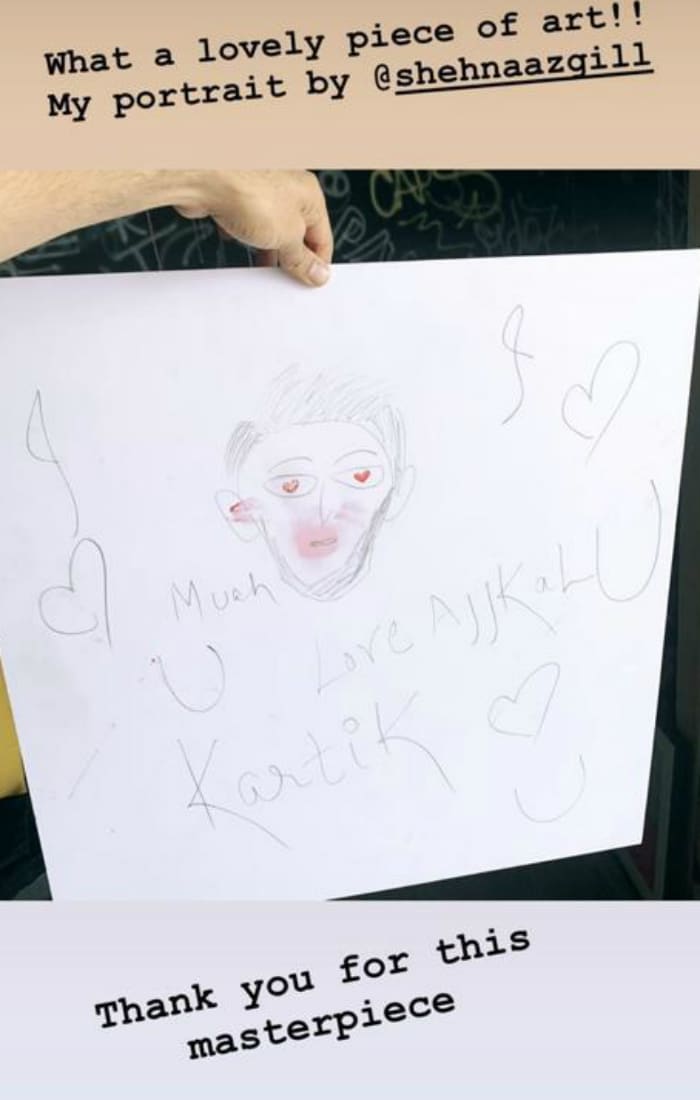 On Tuesday, Kartik posted a picture of himself from the sets of Love Aaj Kal

Kartik Aaryan, who was last seen in in Pati Patni Aur Woh, co-starring Ananya Panday and Bhumi Pednekar, is currently busy with the promotional duties of Love Aaj Kal. The film has been directed by Imtiaz Ali and it showcases two parallel love stories separated by time. The story that features Sara, is set in the current times and the other one that features Arushi Sharma, is set in the Nineties. The film is slated to release on February 14, this year.