Can you spot Salman Khan in the picture? 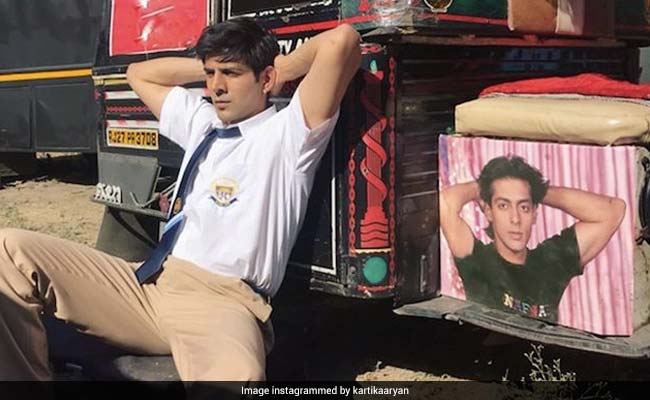 Meet Raghu - Kartik Aaryan's "other half." Confused? Well, On Tuesday, Kartik posted a picture of himself from the sets of his forthcoming film Love Aaj Kal on his Instagram profile. In the picture, the 29-year-old actor can be seen posing like Salman Khan from the 1989 film Maine Pyar Kiya. Dressed in a school uniform, Kartik can be seen posing with his arms on his head with a poster of Salman Khan on the side (with the same pose, of course). Kartik captioned the post: "Maine bhi pyar kiya. Meet my other half Raghu. #Kal #1990 #LoveAajkal ." Just like us, Kartik's Instafam also loved the picture and the comments section was replete with heart and fire emojis.

The much-awaited trailer of Kartik and Sara's Love Aaj Kal released on Friday and it received mixed reviews. The trailer showcases two parallel love stories separated by time. The story that features Sara, is set in the current times and the other one that features Arushi Sharma, is set in the Nineties. Here's the film's trailer:

Kartik Aaryan made his Bollywood debut with Luv Ranjan's 2011 film Pyaar Ka Punchnama and has been a part of movies such as Pyaar Ka Punhnaama 2, Akaash Vani, Kaanchi-The Unbreakable, Guest Inn London and Sonu Ke Titu Ki Sweety. In 2019, the actor starred in Luka Chuppi co-starring Kriti Sanon and Pati Patni Aur Who, alongside Ananya Panday and Bhumi Pednekar - both the films performed well at the box office.