In the first episode of Bigg boss 12, Anup Jalota and Jasleen Matharu were the centre of everyone's attention 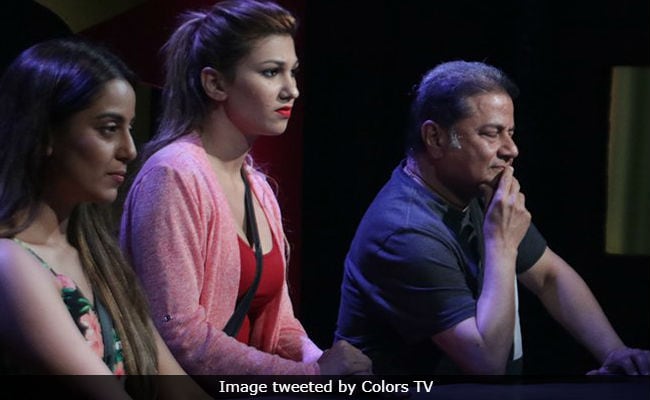 The first day of Bigg Boss 12 started on a highly emotional note, especially for Anup Jalota and Jasleen Matharu. Anup Jalota's relationship with Jasleen made everyone curious. In the morning Jaipur-based Saba Khan, who is participating with her sister Somi, questioned the terms of Anup Jalota and Jasleen's relationship. Jasleen said, "Anup ji is a nice person. He is a friend and confidante and guru, while Anup Jalota said, "It's not like I'm in love or anything." On the first day, the contestants started on a cordial note and had breakfast in unity but Jasleen and singer Deepak Thakur (Gangs Of Wasseypur) are unsure about Saba Khan and Saurabh.

Deepak Thakur and his jodidaar Urvashi (the singer's fan) have found friends in Anup Jalota and Jasleen. Deepak Thakur is not willing to trust anyone soon, based on his interpretation of the previous seasons. Sitting in the garden area, the quartet discusses Saba Khan, whom none of them trusts completely.

Bigg Boss summons Dipika Kakar for the first task, which is called 'BB Press Conference,' which pitches singles against couples. In the task single contestants have to challenge a couple and prove that they are weaker for the show in their comparison. Bigg Boss also invites Hina Khan and Hiten Tejwani from the previous season to moderate the task. Shristy Rode is the first to challenge Anup Jalota and Jasleen.

Shrishty says that Anup Jalota's age won't be on his side for the tasks, which Jasleen counters by saying that all tasks are not about physical fitness and stamina. Saba then says that Jasleen and Anup lack chemistry and Jasleen promptly replies that just because they've entered as a couple that doesn't mean they spend all their time together.

Dipika Kakar alleges that Jasleen was reluctant to talk about her relationship with Anupa Jalota. This question is raised by several other contestants. Jasleen silences everyone by saying: "This is not a show about dating, it's Bigg Boss." When Hina Khan asked Jasleen to say it clearly, she said: "I accept it." As per final voting, Anup Jalota and Jasleen's Jodi loses to singles represented by Shrishty.

After the task, Sreesanth backed Jasleen and Anup Jalota; Sourabh Patel (who is participating with businessman Shivashish Mishra), who raised questions about Anup Jalota and Jasleen's relationship, came over to say that it was only a part of the task.

Next Nehha Pendse challenge Deepak and Urvashi. Nehha says that Deepika and Urvashi do not have a strategy in place to tackle the contestants in Bigg Boss. In addition, she accused them of not participating in activities. Deepika says that he cannot just take up tasks or make up tasks to appear on camera.

Anup Jalota and Jasleen came to Deepak and Urvashi's defence saying that Nehha is unprepared and she probably chose Deepak and Urvashi's name in hurry. However, she said that this was necessary to get clarity of thought. In this round, singles represented by Nehha was outvoted.

That was the end of the first part of the task and other contestants will commence the task on Day #2.

In the final segment of the first episode, Somi Khan and Shivashish Mishra start a fake fight which the other housemates thought was real and tried to diffuse the tension.

In the upcoming episode, responsibilities and house chores become an issue with housemates and Somi and Sana are on everyone's radar.

Did you like the blockbuster start of Bigg Boss 12? Tell us in comments and stay tuned for more updates.