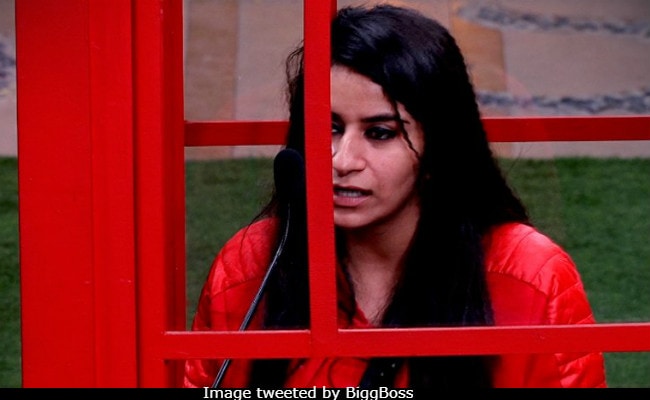 Wednesday's episode of Bigg Boss 12 was an interesting one as this episode decided the winner of the Ticket To Finale task. Bigg Boss on Wednesday started with Karanvir Bohra reading out the details of the task to the housemates. Participating in the task were Surbhi Rana, Deepak Thakur and Dipika Kakar. As part of the task, each of the participants were to hear out complaints lodged by their housemates over a phone. The participants were to sound a bell when after half an hour - the one with the exact timing would win the task. Deepak was the first contestant who started the game and faced the wrath of the housemates.

Surbhi was the first one to hurl accusations at Deepak from inside the telephone booth and then Sreesanth also asked him to behave on the show. Then came Romil Chaudhary, who accused Deepak of ditching friendship. Dipika Kakar asked Deepak that if he appears to hate celebrities so much then why did he join the show in the first place. Later, Dipika and Deepak had an altercation but she remained stern on her point.

Next up is #SurbhiRana for the task! How will she react to the mean comments of the housemates? #BB12#BiggBoss12pic.twitter.com/Z8pGHpMbYd

Next came Surbhi and Somi began accusing her of being a "dhokebaaz". Deepak joined the task and called Surbhi fake and accused her of playing the "woman card" to come out of difficult situations. Romil reminded Surbhi that she's survived this long on the show because of his grooming and that it's not the other way round. Sreesanth asked Surbhi to evaluate her actions towards him, especially when he's saved her from nominations and made her the captain. Dipika Kakar accused Surbhi of creating havoc in the house. While counting the minutes, Surbhi welled up but resisted herself from breaking down.

Finally, it was time for Dipika Kakar to listen to others without lodging protests. Surbhi claimed that she's "trying to be extra cool" and yet again accused her of being Sreesanth's spokesperson. Deepak told Dipika that she's failed to mingle with the housemates. Romil called her "fake" and accused her of blindly supporting Sreesanth. Later, Dipika broke down on the show when Sreesanth pacified her.

#SurbhiRana thinks that @ms_dipika never had a strategy for the Bigg Game and neither does she perform in the tasks! #BB12#BiggBoss12@Chingssecretpic.twitter.com/shYPbRWC88

End of the task, Bigg Boss announced Surbhi Rana as the winner of the Ticket To Finale task while Dipika Kakar couldn't believe that she lost by such a huge margin.

With just a few days left for Bigg Boss 12, the episode ended with Karanvir Bohra, Romil Chaudhary, Somi, Deepak Thakur and Dipika Kakar on the list of nominated housemates.