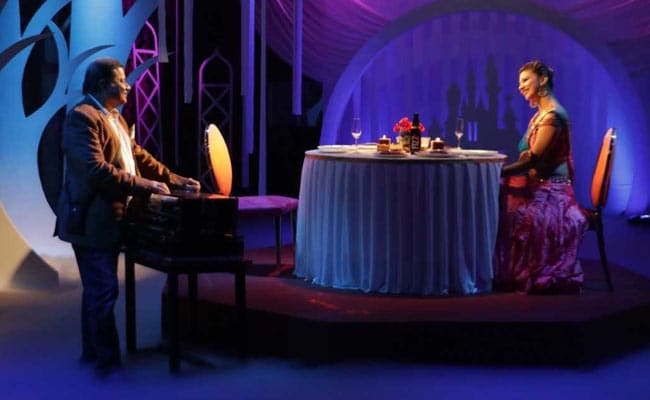 Amidst all the chaos that is tearing the house apart, vichitra jodi Anup Jalota and Jasleen Matharu shared some romantic moments with each other at a dinner date which was arranged for the duo. Just a few episodes earlier, we had witnessed Anup Jalota being upset with Jasleen's decision to not sacrifice her make-up and clothes during a task in which he was kidnapped by fellow contestant Dipika Kakar. He announced to all the housemates that he breaking his ties with Jasleen and will continue the game individually. After much persuasion, Anup Jalota patched-up with Jasleen on Thursday. Bigg Boss planned a romantic surprise for the couple. The duo spent some quality time with each other during the dinner and we also witnessed Anup Jalota singing Chaudhvin Ka Chand for his partner. The duo shared a romantic moment on the dance floor and Anup Jalota fell on his knees with a red rose and said: "I love you" to Jasleen.

But if you thought that the day was peaceful without any arguments or fights, well, think again. After the luxury budget task, the Khan sisters Saba and Somi, Sourabh Shivansh, Surbhi-Romil were chosen for the Captaincy task. Somi, Surbhi and Shivansh took part in the task wherein they had to cling on to a ring to win the task. Neha Pendse, who was the moderator of the task disqualified Somi for playing unfair. Unhappy with Neha's decision, the Khan sisters once again created a ruckus in the house.

A new day begins and Bigg Boss asks housemates to nominate contestants for Kaalkothri. Bigg Boss nominates Sreesanth, Karanvir and Neha for elimination. Surbhi and Sreesanth get into an argument for counting incorrectly in nominations. Surbhi Rana loses temper after Sreesanth spits on her.