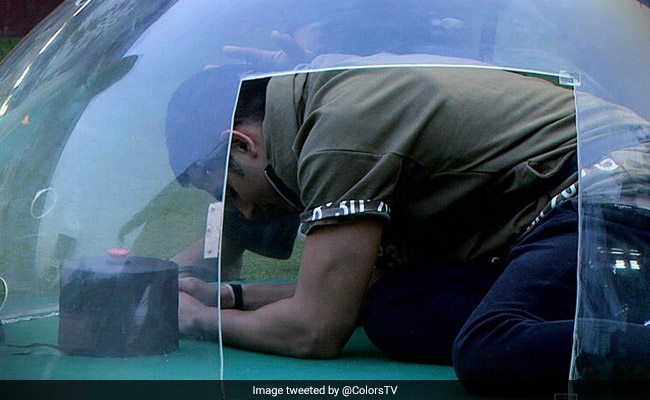 New Delhi: In Bigg Boss' last episode, the contestants were given a true test of time. With no watch clock or sun-dial to assist them, the gharwale had to accurately track a total of 42 minutes, whilst confined within the 'Nomination Dome.' Adding to the complication, the rest of the contestants had to distract the one inside the dome and stop them from pressing the buzzer and exiting the dome on the 42nd minute. Each contestant found ways to count the minutes while Hina Khan strategized on how to distract everyone and ensure they failed in the task. Armed with a calm composure, first one to enter the dome was Puneesh. He patiently waited for time to pass as Priyank, Hina and Luv tried their best to distract him. Knowing that Puneesh had a certain hatred towards Papaya, Luv decided to torture him by putting a few slices of the fruit in the dome. Priyank was the next one inside the dome and his strategy was to sit inside the dome with his head down to keep all interruptions at bay. Akash was the next one in and Priyank decided to use his secret weapon against Akash and brought some garlic to harass him. Luv and Shilpa were the remaining two.

Promoted
Listen to the latest songs, only on JioSaavn.com
Joining Vikas Gupta (who received maximum votes in Bigg Boss's live voting session) and Hina Khan (the captain of the house) in the safe zone were contestants Puneesh Sharma, Shilpa Shinde and Akash Dadlani. Friends Luv Tyagi and Priyank Sharma were nominated for this week's eviction as they lost the task.

Puneesh Sharma is the first contestant to enter the Nomination Dome! Find out if he gets through, tonight at 10:30 PM. #BB11#BBSneakPeekpic.twitter.com/y0KVlXuRIX

Bigg Boss will surprise all the contestants with their loved ones, who will be on the other side of the wall. Also, ex-Bigg Boss contestant Bandgi Kalra will come in the house for Puneesh. Excited much?