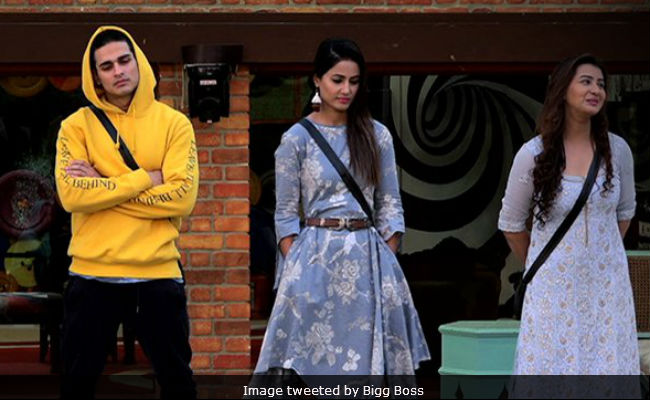 New Delhi: "Arshi Khan fake hai aur Vikas Gupta gadha hai," said one of the kaalkothri mates Akash Dadlani. Akash instigated Vikas and Arshi as he made up his mind to torture the two of them inside the jail. Akash resorted to name calling and making fun of Vikas; but soon things went out of control as Vikas got hold of Akash's jacket and decided to flush it down the toilet. (Good move Vikas) As Akash tried to duplicate the same move, Vikas played his cards and locked him up in the washroom. The fight went to another level while the rest of the housemates enjoyed the fight. Some supported Akash and others cheered for Vikas.

The fight between rapper Dadlani and Vikas went bad. The two pushed each other and went physical. Arshi 'begum' tried to make peace between the two while witnesses Luv Tyagi and Priyank Sharma said, "Le li footage."

Later, Bigg Boss called both Vikas and Akash in the confession area and slammed for their behaviour. Even after Bigg Boss' warnings, Akash didn't stop and said, "maine kuch kia hi nahi hai." Very humbly, Vikas accepted that it was his fault and asked Akash to sleep.

Akash Dadlani and @lostboy54 get into an ugly fight! Find out what will happen next, tonight at 10:30 PM on #BB11. #BBSneakPeekpic.twitter.com/wObk0MbeHQ

We also witnessed badalte rishte in today's episode. Hina found similarities between herself and Shilpa Shinde while Priyank decided not to speak with Hina Khan ever again.

Bigg Boss gave this week's captaincy task to contenders - Hina, Luv, Priyank and Shilpa. There was a massive photo frame built in the lawn area. The contenders for captaincy had to stand inside the frame and the one to stand for the longest, would be declared the next captain of the Bigg Boss house. The remaining gharwale actively partook in the task by trying to distract the contenders. Akash and Puneesh together made the task gruesome for the contenders by apply oil and conditioner on the floor of the frame so that the contenders could easily lose their balance and fall down.

The captaincy task is announced! Tune in tonight at 10:30 PM to find out who will win it! #BB11#BBSneakPeekpic.twitter.com/4jQ5wTueNW

Promoted
Listen to the latest songs, only on JioSaavn.com
Bigg Boss gave a warning to the contenders of captaincy that he would discard the task because none of the contestants showed interest. Later, the gharwale indulged in a conversation and decided who should be the next captain of the house. With mutual decision, Hina became the new captain of the house.

Priyank and Luv discussed Hina's behaviour and felt disheartened with her attitude. Host Salman Khan will take up all the issues in tomorrow's Weekend Ka Vaar episode and tomorrow is definitely a big day because Bigg Boss will go live. Excited?