Bigg Boss 11: A Pic Of Salman Khan And Mouni Roy Is Breaking The Internet

Social media have ensured that the photograph of Salman and Mouni goes crazy viral. The photo shared by fab clubs of the reality show features Salman and Mouni together while the caption reads: "And the promo shoot is done." 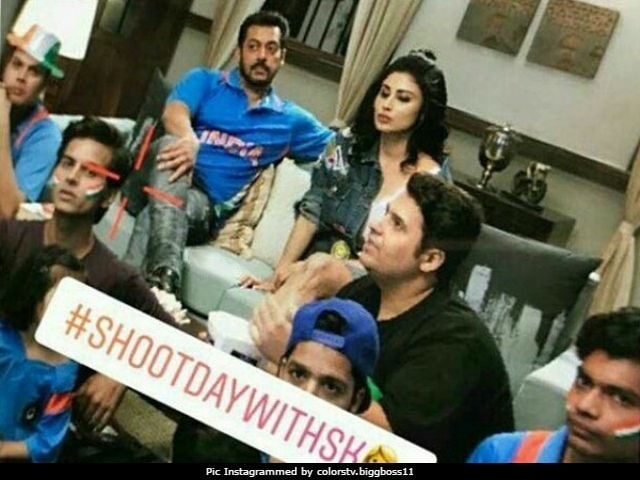 New Delhi: Bigg Boss 11 is still a few months away but Bigg Boss being Bigg Boss, never stops trending. Salman Khan, who will return to host the new season of the show, has reportedly shot the promo recently - a picture, which the Internet thinks is from the sets of the promo shoot, is doing the rounds on the Internet. What's even more thrilling for netizens is that there are TV star Mouni Roy and Salman in the same frame. The prospect of Mouni, who has a huge fan following, and the 51-year-old superstar sharing screen space, is what keeping the Internet very busy. During Bigg Boss 10, Mouni had joined Salman Khan on a few episodes of Weekend Ka Vaar.

Social media have ensured that the photograph of Salman and Mouni goes crazy viral. The photo shared by fab clubs of the reality show features Salman and Mouni together while the caption reads: "And the promo shoot is done."

Meanwhile, team Bigg Boss have also slightly redone the show's logo for the new episode. It was unveiled over the weekend on Bigg Boss's official Facebook page.


Earlier this year, the return of Salman Khan on Bigg Boss was announced by Raj Nayak, the CEO of Colors, the channel which airs the show.

Promoted
Listen to the latest songs, only on JioSaavn.com
Mouni Roy is done with the second season of her popular TV series Naagin and is currently filming Gold - her Bollywood debut opposite Akshay Kumar. Salman Khan is busy with the shooting schedule of Ali Abbas Zafar's Tiger Zinda Hai, in which both he and Katrina Kaif reprise their roles from 2012's Ek Tha Tiger.

Bigg Boss 11 will expectedly go on air in October and will reportedly feature a mix of star and non-celebrity contestants. TV actress Nia Sharma, model Mohit Malhotra, actress Sana Saeed and Dhinchak Pooja have reportedly been approached to join the show.