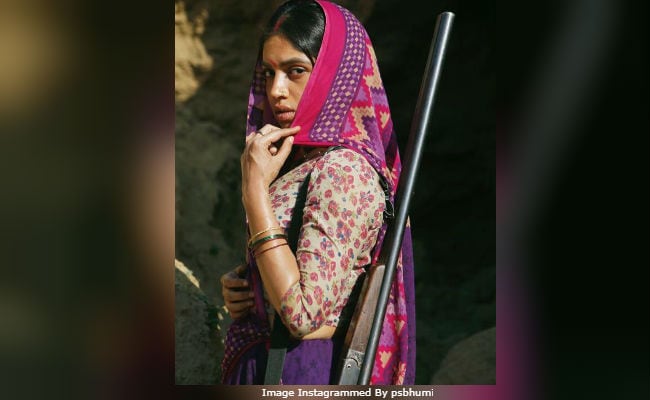 New Delhi: Actors Sushant Singh Rajput and Bhumi Pednekar have wrapped the shooting of Sonchiriya, their first film together. As they completed the shooting schedule, Bhumi shared her look from the film on social media and wrote, "Sonchiriya. As we wrap up this unforgettable journey, sharing a bit of me from this very special film." In the picture, Bhumi, who plays a dacoit, is seen wearing a purple sari with a printed blouse and carries a gun with her. Comments such as "Bhumi Pednekar, this is beautiful and strong" and "looks like in this stellar cast, you are the one who is going to stand out" have been posted.

Take a look at Bhumi Pednekar's picture from Sonchiriya.

In a separate post, she also thanked director Abhishek Chaubey for the film.

Of Bhumi's preparations for the film a source earlier told DNA, "Bhumi has chosen dusty suburban fields to swanky gyms as her training ground and her workout regime now includes walking with buckets filled with water on her head under the boiling sun, sweeping and cleaning floors, walking barefoot in dusty fields and lanes, grinding wheat, among other rigorous household chores that rural women in India do."

A couple of months ago, Sushant Singh Rajput's first look from the film was unveiled. He also plays a dacoit in Sonchiriya. Twitter was floored by the actor's 'Gabbarwala look.'

Promoted
Listen to the latest songs, only on JioSaavn.com
The plot of Sonchiriya revolves around the Chambal dacoits and is set in the 1970s. The film has been shot in Chambal.

Sonchiriya is expected to release next year.