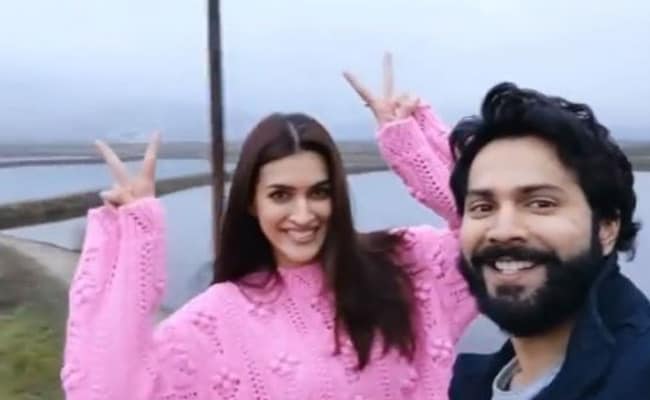 It's a wrap for Bhediya stars Kriti Sanon and Varun Dhawan. The actors, who have been shooting for the film in Arunachal Pradesh since March, finally completed their schedule in the state on Monday. Kriti, who will star opposite Varun in the upcoming movie, bid goodbye to scenic Ziro with a social media post. The actress uploaded a video with her co-star on Instagram, which shows them bidding adieu to the small town. The clip starts with both the actors peeping out of a moving car through the window and enjoying the fresh breeze on their faces. They also spent some time near a lake before announcing the schedule wrap.

Kriti captioned the post with hashtags "ArunachalTravelSeries" and "BHEDIYA" and added, "Episode 4: And... It's a schedule WRAP!" She also penned a thank-you note for the authorities in Arunachal Pradesh. She wrote: "We were blessed to have finished the schedule so smoothly during this terrible pandemic, thanks to Arunachal Pradesh being a Covid-free state and the authorities being so helpful!"

On Monday, Kriti shared a series of photos from the same location and wrote a farewell note for Varun. While Kriti is dressed in a pretty pink sweater and jeans, Varun is clad in a dark jacket and a T-shirt paired with jeans. In the caption, Kriti wrote: "And it's a schedule wrap for me in Ziro for BHEDIYA! From Dilwale to Bhediya and all the years of friendship in between, we've come a long way, Varun Dhawan. Gonna miss you, the captain of our pack Amar Kaushik and the entire Wolfpack. See you guys soon!! And bye bye Ziro!"

Both Kriti and Varun have been regularly updating their fans about their experience in the state. They shared several snippets through pictures and videos over the last few weeks on Instagram.

In case you missed the lovely pictures, take a look:

Kriti Sanon and Varun Dhawan have previously worked together in Dilwale (2015) and Kalank (2019). Bhediya, which is being directed by Amar Kaushik, is scheduled to release on April 14, 2022.