Bharti Singh And Haarsh Limbachiyaa's Honeymoon Pics Are A Dream

Bharti and Haarsh are enjoying their honeymoon in Europe 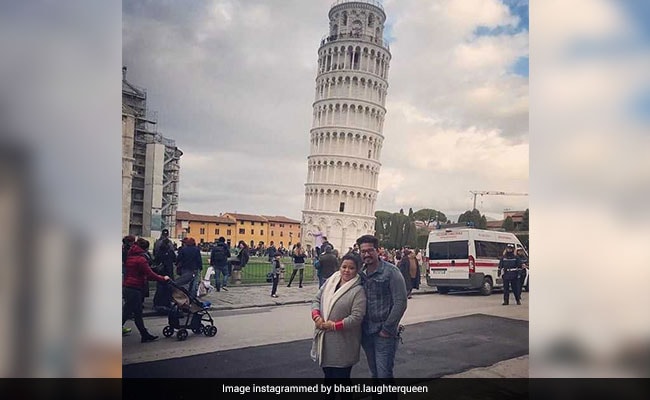 New Delhi: TV star Bharti Singh and Haarsh Limbachiyaa married in December last year, took some time off and set off for their much-awaited honeymoon to Europe. Bharti and Haarsh have been filling up a virtual album with pictures from across Europe. In between, the duo travelled to Dubai for a short trip and enjoyed the Christmas festivities there. Bharti and Haarsh recently landed in Italy and made it look a lot more fabulous. They posed in front of the famous Leaning Tower of Pisa and Bharti captioned the photo as "Romancing on the streets of Italy." Bharti and Haarsh also celebrated the New Year hopping around Amsterdam, Netherlands. The love birds have already enjoyed in Prague, have relished ice cream in Budapest's cold weather and made awesome memories in Rome, Italy - there's proof on social media.

Bharti and Haarsh showing off their photography skills.

The tower might be leaning... Not our love Kya bolte ho @haarshlimbachiyaa30 Romancing on the streets of Italy #bharshhoneymoon #honeymoongoals#couplegoals #Europe #italy

'Rome' with me! Bye Amsterdam.... On our way to Rome! #bharshhoneymoon #honeymoongoals#couplegoals #Europe #Rome

When one adventure ends, the other is already awaiting! Bye Prague! Off to Amsterdam #bharshhoneymoon #honeymoongoals #couplegoals #instalove

Bharti Instagrammed this adorable picture with a heartfelt message. "Once in a while right in the middle of ordinary life, love gives a fairly-tale."

Once in a while right in the middle of ordinary life, love gives a Fairly tale. #couplegoals #honeymoongoals #bharshhoneymoon #loveisintheair

Bharti and Haarsh had a big fat Punjabi wedding on December 3rd in Goa. The shaadi was attended by Bharti's close friends and colleagues from the industry. Actors like Monalisa, Karan Wahi, Anita Hassanandani with husband Rohit Reddy, Kishwer Merchant and others were in attendance.

Promoted
Listen to the latest songs, only on JioSaavn.com
Ahead of the wedding, Bharti and Haarsh hosted a couple of functions. They enjoyed the haldi ceremony, mehendi, sangeet function and a pool party in Goa. The couple also hosted a reception party for their friends and families.

Bharti and Haarsh together participated in the dance reality show Nach Baliye 8. Bharti has been part of various shows like Comedy Circus, Comedy Nights Bachao and Jhalak Dikhhla Jaa.