"Happy Bhai Dooj to all," Shilpa Shetty captioned the post 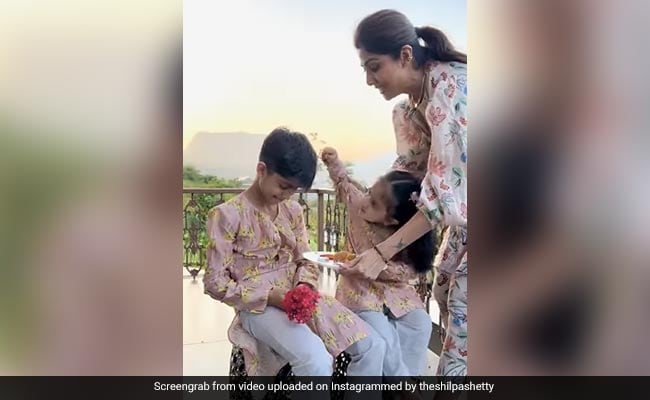 Shilpa Shetty blessed our Instagram feed with a super cute video from her kids Samisha and Viaan Raj Kundra's Bhai Dooj festivities. On Thursday, she shared a video, in which little Samisha can be seen twinning with brother Viaan Raj Kundra. Shilpa Shetty can be seen helping out little Samisha with the festivities. Shilpa Shetty captioned the post: "Bhai behen ki yaari hoti hai sabse pyaari (friendship of brother-sister is the most lovely). Happy Bhai Dooj to all." She accompanied the post with the hashtags #bhaidooj, #bhaubeej, #family, #grateful, #siblinglove, #blessed and #gratitude. Shilpa's sister Shamita Shetty wrote "Aww" in the comments. Riddhima Kapoor Sahni dropped heart emojis in the comments section.

Shilpa Shetty shared pictures from the Diwali album earlier this week, which featured the actress, her daughter Samisha and son Viaan dressed in colour-coordinated pink outfits. "About last night," she captioned the post.

Shilpa Shetty married entrepreneur Raj Kundra in November 2009. The couple are parents to two kids - a son named Viaan and daughter Samisha, who they welcomed via surrogacy in 2020.

On the work front, Shilpa Shetty was last seen in Sabbir Khan's Nikamma. She was also seen as one of the judges on the TV reality show Super Dancer Chapter 4, alongside choreographer Geeta Kapoor and filmmaker Anurag Basu. The actress will next be seen in Rohit Shetty's Indian Police Force. She stepped into Bollywood with the 1993 thriller Baazigar and is best-known for her performances in films such as Main Khiladi Tu Anari, Dhadkan, Life In A...Metro, Apne, to name a few.