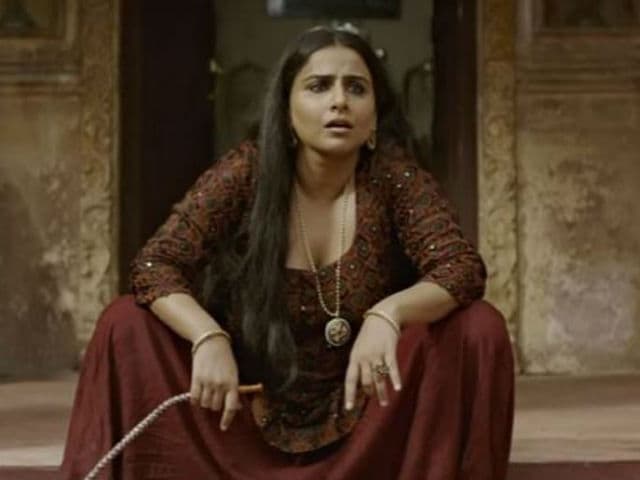 Begum Jaan trailer: Vidya Balan in still from the film

New Delhi: The trailer of Vidya Balan's upcoming film Begum Jaan is out and it is both intriguing and intense. The 38-year-old actress, who plays a brothel 'madam' in Partition-era India, looks fierce in the three-minute-long clip. The events of 1947 set in motion a chain of violence, told in the film through the story of a handful of defiant women. The trailer reveals that Begum Jaan, played by Vidya, is asked to vacate her brothel as the Radcliffe Line that is to split Punjab into two halves will be drawn through it. Begum Jaan, rallied by the prostitutes who work for her, refuses to leave and declare their intention to die as "ranis" or queens. Begum Jaan is the Hindi adaptation of the 2015 Bengali movie Rajkahini, shifting the scene of action from Bengal to Punjab. The film is scheduled for release on April 14.

Other than Vidya Balan, the film features an impressive cast: Naseeruddin Shah, Ila Arun, Gauahar Khan, Pallavi Sharda, Rajit Kapoor and Ashish Vidyarthi star in key roles, as well as an unrecognizable Chunky Pandey. Begum Jaan has been directed by Srijit Mukherji, who made the Bengali original, and produced by brothers Mahesh and Mukesh Bhatt. The music of the film has been composed by Anu Malik.


Vidya Balan is known for playing fearless women in films like The Dirty Picture and Kahaani. Her performance in Begum Jaan promises to be her most fiery so far.

In a recent interview to news agency PTI, the No One Killed Jessica actress said that Begum Jaan was a 'difficult' film to do. Vidya said: "I am the madam of a brothel and the film is set in the Partition times and we are at the risk of losing our house, our space so there is lot of emotional, mental and sexual violence and not physical violence. It was difficult to do the film as I am doing it for the first time."

Promoted
Listen to the latest songs, only on JioSaavn.com
Vidya Balan released the second poster of her upcoming film on International Women's Day.