Beach To Knock-Knock Jokes: Sara Ali Khan's List Of Promises For Brother Ibrahim On His Birthday 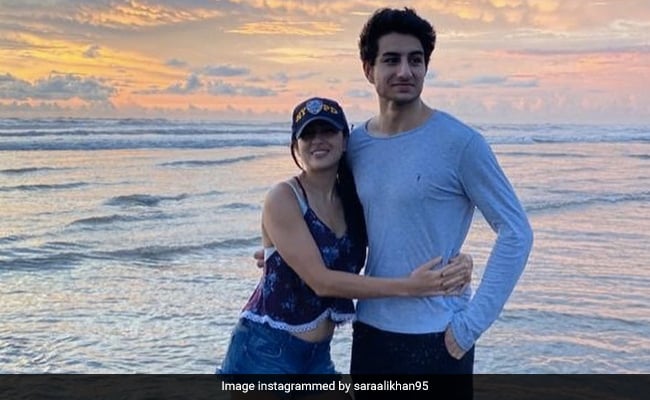 Ibrahim Ali Khan is a year older and on his special day, his sister and Bollywood star Sara Ali Khan shared special post on her Instagram account. She shared a set of picture - some of which are throwbacks from their childhood days while some are relatively recent shots. On his 20th birthday, Sara made a lot of promises to her brother Ibrahim. She wrote in her caption: "Happy Birthday Iggy Potter. I promise to always make you the best coffee, stalk you to come with me to the beach, feed you with pyaar, irritate you always, force you to pose even as a new born, ensure you to countless swimming laps, make you lose at badminton, be the worst Google maps navigator and tell the best knock knock jokes."

Sara Ali Khan doesn't need an occasion to celebrate her birthday. She frequently shares posts with her brother on Instagram. Earlier this year, Ibrahim along with mom Amrita Singh, accompanied the actress to her Maldives vacation.

Sara Ali Khan made her Bollywood debut in 2018 and has featured in films such as Kedarnath (her debut film), Simmba and Love Aaj Kal. Sara's upcoming project is Atrangi Re, co-starring Akshay Kumar and Dhanush. She was last seen in the Coolie No 1 remake, co-starring Varun Dhawan. The film released on OTT platform Amazon Prime Video.