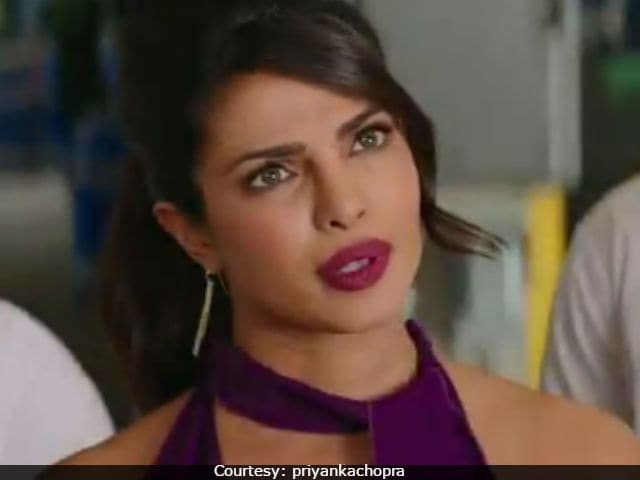 New Delhi: The new trailer of Priyanka Chopra's first Hollywood film Baywatch is out and it is all about Dwayne 'The Rock' Johnson and Zac Efron. However, Priyanka Chopra's fans, rejoice. We finally get to hear the 34-year-old actress and she managed to get two shots in the new trailer unlike the other two. In the trailers that were released earlier, we got see Priyanka just for few seconds. The Quantico star plays the antagonist Victoria Leeds. "Some people are up to no good," says Priyanka to Dwayne Johnson. Going by the trailer, Baywatch promises to an interesting film with some stunt sequences, underlining humour, drugs and some abs-showing scenes. Dwayne Johnson plays a lifeguard Mitch Buchannon.

"Welcome to Baywatch! Our team is the elite of the elite" - the trailer opens with this line.

Watch the trailer of Baywatch here:

"Drugs. Murder. A dead body on our beach. And it all started once she took over." #BeBaywatch#VictoriaLeeds@baywatchmovie#May26pic.twitter.com/GRjOpEBqRI

The Seth Gordon-directed film also stars Alexandra Daddario, Kelly Rohrbach and features cameos from the original show. It is an adaptation of the famous Nineties television series with Pamela Anderson and David Hasselhoff in the lead roles.

Of Priyanka's blink-and-miss shot in the earlier trailers, her mother Madhu Chopra had said that it is a part of "publicity strategy" and the makers "don't want to give out the best part of the film," reported news agency IANS.

Promoted
Listen to the latest songs, only on JioSaavn.com
Priyanka Chopra, who has temporarily shifted her base to New York, is currently shooting for the second season of television show Quantico. She recently made an appearance at the Oscars 2017 and was also represented her film at the Golden Globes. Back home, she was last seen in Jai Gangaajal.

Baywatch releases on May 26.

Amber Heard Reveals Coming Out As Bisexual Was "Difficult"